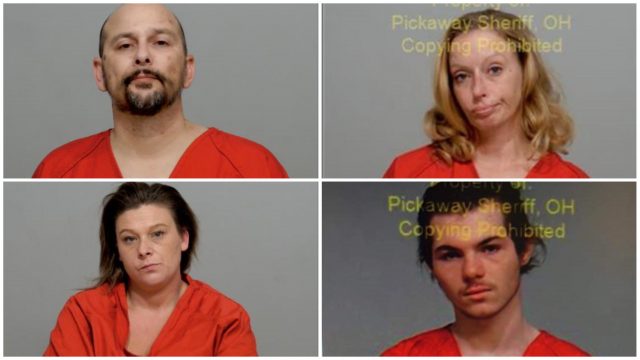 PICKAWAY – It was a busy day in Pickaway county on Thursday and almost every agency in the county got a turn in chases all over.

The first chase started at around 2:50 pm on US-23 with South Bloomfield’s finest when a driver refused to stop during a routine traffic stop. That chase went Northbound on US-23 then turned onto Weigand road into Ashville, the chase continued Southbound on Ashville Pike where the chase ended at 800 Long Street apartments. During the chase, something like a gun was tossed out the window, and recovered by Law Enforcement. Arrested was Jennifer Zalipski, 35 drivers for obstructing official business, failure to comply with an order of police officer, improper handling of a firearm in a motor vehicle, obeying traffic control signals, driving under FRA suspension, Driving marked lanes, turn and stop signals, and speed limits she also had a warrant out of Vinton County. Joseph Hurley, 18 was also charged with Tampering with evidence, improper handling of a firearm, possession of drugs schedule I, II, Obstructing official business, and Possessing Drug use instruments, he also had a warrant out of Pickaway county.

The second chase occurred around 6 pm when Sergent Murphy of Commerical Point was on his routine beat just off 104 when he noticed something out of place going on in the construction zone of the new Foxfire subdivision. When Murphy went in to investigate two men jumped into a dually pick up truck and took off. They went south on 104 and after a short chase they abandoned the vehicle and took off on foot into the local woods. Law enforcement surrounded the area but, was not able to capture the construction site thieves. According to law enforcement, they took possession of the abandoned vehicle and had enough information to possibly lead to a warrant arrest in the future.

The Third and final chase for the day started in Circleville on 22 when Ohio State Highway patrol attempted to stop a vehicle for tags and not maintaining lanes just west of OCU. The vehicle again took off from Law enforcement and took OSP and Sheriff departments from two counties for a multi-county ride through the backroads of North East Pickaway county into Fairfield county where officers had to box the vehicle in after blowing two tires from spike strips to get the driver to stop at 188 and 33 in front of the Lancaster Ohio State Highway patrol post located at 3800 Lancaster-Circleville Road. Two were arrested in this chase driver Jason Enoch of Columbus was charged with possession of drugs, OVI, reckless operation of vehicles, Fugitive from justice (3), operating a motor vehicle with a valid license, driving under FRA suspension, Seatbelt violation, faulty exhaust, display of license plate, fictitious plates, and failure to comply with order or signal of PO risk of physical harm. His rider Christina Littleton was also arrested on two warrants out of Franklin county one from the Franklin sheriff department, and a second out of Grove City.