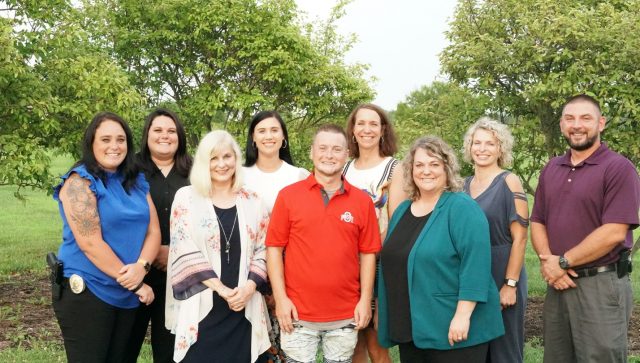 Approximately sixty people attended the event, including friends and families of the graduates, elected officials, and other community supporters.

Judge Elisa Peters implemented the Circleville Municipal Recovery Court in
March 2021. The Ohio Supreme Court certified the Court in March 2022. The
program is designed to offer intensive support to participants by members of a treatment team consisting of the Judge, probation officers, a Recovery Court Coordinator, local treatment providers, a prosecutor and defense attorney. The fourteen-to-eighteen-month program includes four phases beginning with weekly contacts with the Judge and probation officers, often daily contacts with treatment providers, and a minimum of two substance screens per week.

Each of the three Courts in the County offers a version of this type of program. Judge Shelly Harsha presides over Pickaway County Juvenile Family Treatment Court and Judge P. Randall Knece over the Pickaway County Common Pleas Drug Court. Judge Peters acknowledged that the Circleville Municipal Recovery Court program faces unique challenges. “We don’t wield the hammer of a felony prison sentence or permanent loss of custody of children. As such, our participants must enter the program with a personal desire to enjoy a drug-and-alcohol free lifestyle, to realize improved relationships with family and friends, and to gain the skills necessary to pursue long-term goals.”

Carrie McKnight and Ryan Crum were honored as the first graduates of the
program. McKnight has been substance free for 404 days. Judge Peters said of McKnight, “I have seen Carrie become goal-oriented, focused, driven, honest, a loving-mother, and a caring daughter. She successfully overcame adversity in the midst of the program and came out stronger on the other side. She was a model participant in this program.” Crum has been substance free for 448 days. “Through this program Ryan gained the skills necessary to adapt to the various curve balls life throws. He put those skills into practice on numerous occasions and completed the program without a single sanction imposed,” said Judge Peters. “More impressive, however, is the transformation I witnessed in his role as a father to his two sons. He now has the relationship with them that he deserves. I am so proud of him.”

The evening was celebrated with a catered dinner, plaques for the graduates and words of encouragement from Judge Peters, the Recovery Court Coordinator, probation officers and treatment providers. Before the night ended, Judge Peters announced that all fines and costs due and owing to the Court would be waived as a reward for successful completion of the program.

“Ryan and Carrie have worked so hard,” said Judge Peters, “they are
productive members of our community and deserve to have a fresh start.”