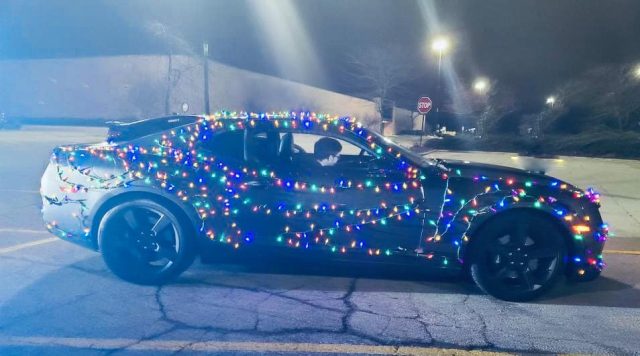 WISCONSIN – A young man was pulled over in Wisconsin after covering his Chevy Camaro with Christmas lights. Although the Trooper found the idea “creative” she had to let the driver know that it was illegal.

According to Wisconsin State Legislature, and Ohio code also it is illegal to operate a motor vehicle with any color light other than white or amber visible from directly in front or any color than red from rear and any flashing lights.

The trooper let the man off with a warning took a photo and posted it on their Facebook group to spread the cheer.

The young mans dad commented on the post saying that he was a former police officer himself and had warned his son that he may get pulled over for his infraction. He did say that even though at first he was proud of his son for the impact he has caused in the community.

“On a side note, the impact my kid has made this season is beyond unbelievable. The posts from people all over is mind blowing. My son is getting requests from neighborhoods, nursing homes, activity centers, etc. just to stop by and brighten kids to seniors day. The joy that my kid has brought has left me speechless. As a fellow brother of blue, I initially cringed, but I’m over that now. It has def brought unexpected joy to so many and for that I’m proud of my kid,” said Larry Kamholz.

Others on the post were not so nice calling out the Troopers for not having Christmas spirt and being Grinch’s. You can check out the comments on this link: https://www.facebook.com/WIStatePatrol/posts/437369944317001