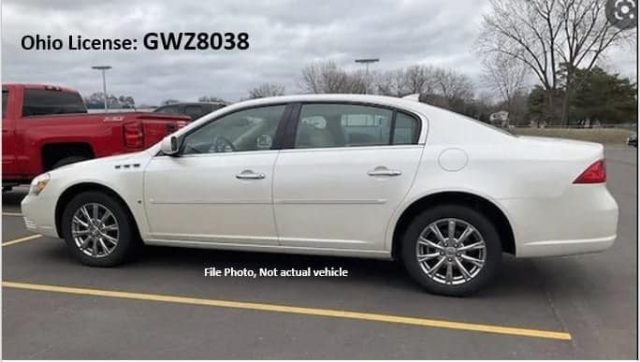 On Sunday morning, May 15th, 2022 the Fayette County Sheriff’s Office was contacted concerning the discovery of a deceased male located in a barn lot in the 200 block of Bloomingburg-New Holland Rd NE in Union Township.

The investigation revealed that a white 2009 Buick Lucerne, bearing Ohio registration GWZ-8038 belonging to Mr. Anderson was missing. Detectives from the Circleville Police Department responded to the Bloomingburg-New Holland Rd scene and both agencies have collaboratively launched an investigation into the death of Mr. Anderson.

Below is an image giving a likeness to Mr. Anderson’s MISSING VEHICLE. As the investigation continues, anyone with any information is encouraged to contact the Fayette County Sheriff’s Office at 740-335-6170 or the Circleville Police Department at 740-474-8888. Anonymous tips may also be made via the Fayette County OH Sheriff app or by visiting our website at www.faycoso.com