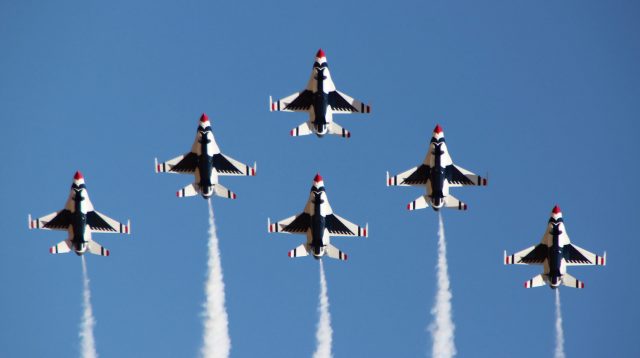 The 2021 CenterPoint Energy Dayton Air Show on July 10th and
11th at the Dayton International Airport. The Thunderbirds will be joined by other military favorites in the air including, the U.S. Navy Super Hornet and Legacy Flight demonstration team, the U.S. Air Force C-17
Globemaster III demonstration team and the U.S. Army Golden Knights Parachute Team.

The show is back to its normal format after covid restrictions have been lifted.

Some of the highlights

AeroShell Aerobatic Team – This award-winning formation team will remind you of yesteryear when
they thrill spectators with their four, 600-horsepower, radial engine T-6 Texan aerobatic routine.
• Mike Wiskus – Watch this National Aerobatic Champion’s incredible performance in his Lucas Oil highly-modified Pitts aircraft “Super Stinker”. If you can believe it, he bought the aircraft on eBay as a
wrecked airplane.
• Jacquie B…Ladies, it’s Time to Fly – See this accomplished female aerobatic pilot put her Extra 300S aircraft through the paces. She spends time inspiring children to do great things. Go girl!
• Shockwave – Powered by three afterburning jet engines producing 36,000 HP, Shockwave is the Guinness Book world-record holder for the fastest jet truck in the world at 376 MPH.

US Military will be on scene for meets and greets

“What an awesome show we have for you in 2021,” said Scott Buchanan, Chairman of the United States Air and Trade Show Board of Trustees, producers of the show. “It’s so great to be back. I would like to take this
opportunity to thank the City of Dayton, City of Vandalia, Wright Patterson Air Force Base, all the sponsors, volunteers, and fans for making the show possible. “This would not be possible without all of you, and we look
forward to a sensational weekend,” he added.

Deep discount general admission tickets are also available for purchase at over 100 Kroger stores in the Dayton and Cincinnati region.