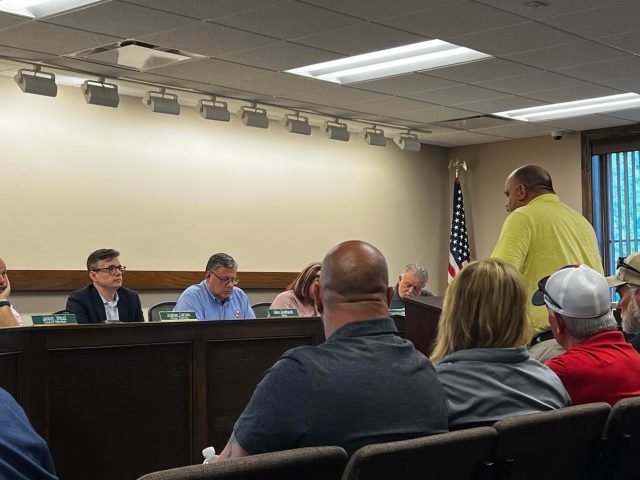 Commercial Point – In July 2022 Commerical Point Council voted to remove an appointed peace officer after serving the town for many years.

Sgt. Murphy has an up and down relationship with the village where he has been removed from duty before.

Murphy was removed previously on a six-month probationary period in 2015, but the officer argued that he had been working in the village since 2006 and had long passed the probationary period, that the council simply failed to act on the confirmation or removal.

After filing a lawsuit against the village the Judge agreed with Murphy and returned him to duty.

On June 26, 2021, he was appointed to a full-time position with the police department, and according to Council a new 6-month probationary period. After the 6-month probation Commerical Point Mayor recommended that Murphy be confirmed, but Council disagreed putting the Sergeant on another 6-month probation.

Six Months later in July of 2022, the mayor changed his opinion and recommended removing Sgt. Murphy from his position.

We asked the mayor what changed in his opinion over the last 6 months.

“During the second probationary period, Sergeant Murphy was not on duty with the Village of Commercial Point Police Department but was on duty with the Harrisburg Police Department. An incident occurred within the Village of Commercial Point. The Scioto Township Fire Department was dispatched to the scene. Upon arriving on the scene, Officer Murphy was already there, even though he was not on duty with the Village of Commercial Point and had not been dispatched to the scene. While there, Sergeant Murphy got into a loud verbal exchange with the Assistant Chief of the Fire Department in front of his men. This incident resulted in the Scioto Township Fire Chief having a meeting with our Police Chief expressing his dissatisfaction over what had taken place at the scene. The Fire Chef also met with me over this incident as well. Sergeant Murphy was issued a Final Warning at that time by our Police Chief and instructed once again not to involve himself in incidents without being dispatched.”

“These two incidents have put a negative light on our Village Police Department with the Pickaway County Sheriffs’ office and the Scioto Township Fire Department. Our Police Department interacts with these two departments more than any other agencies. Because of that, there is no room for any dissension or tension between the departments. Unfortunately, there seems to be one common denominator in both incidents. There also appears to be a negative work pattern that has developed and cannot be allowed to continue.“

For these reasons, the Mayor recommended that the Council not confirm Sergeant Murphy as a full-time police officer with the Village of Commercial Point Police Department.

During the council meeting in July Sgt. Murphy’s Lawyer reminded the council the facts that Murphy has been working for the village since 2006, that he was fired before, and got his job back after a previous probationary period, and that there were reasons Murphy responded to the calls that were outlined in the mayor’s letter and suggested the council confirm Murphy to the department.

In July 2022 the Council meeting was held and council members supported the mayor’s recommendation and voted to remove the officer.

Murphys Lawyer said that they have filed a demand letter with the village for reinstatement and if that is not satisfied they will file a lawsuit again.