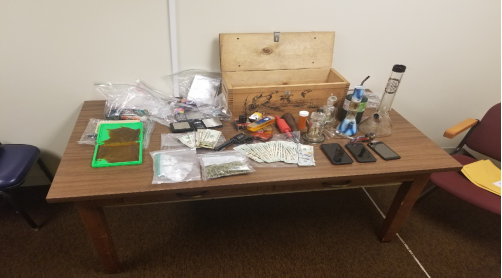 On the evening of March 29,2018, Probation Officers of the Circleville Municipal Court and Pickaway County Intensive Supervision Program conducted a home visit at 510 E. Ohio Street in Circleville, to investigate probation compliance of Ryan Cordle. As officers approached the residence a strong odor of burnt Marijuana was detected. Officers made contact with Mr. Cordle and conducted a probation search of his residence. The search resulted in the discovery of a large amount of Marijuana, 600 grams of Marijuana oils, commonly referred to as “Dabs”, several items of drug paraphernalia, approximately $700 in cash, and a loaded firearm.

Due to the complexity of the items located, the Circleville Police Department was contacted to assist in securing the items. Probation officers were assisted by Sergeant Travis McKinney and Officer Lance Canterbury. Mr. Cordle was placed under arrest for violating the terms of his supervision and three other individuals were released from the scene. This case remains open and is an ongoing investigation.