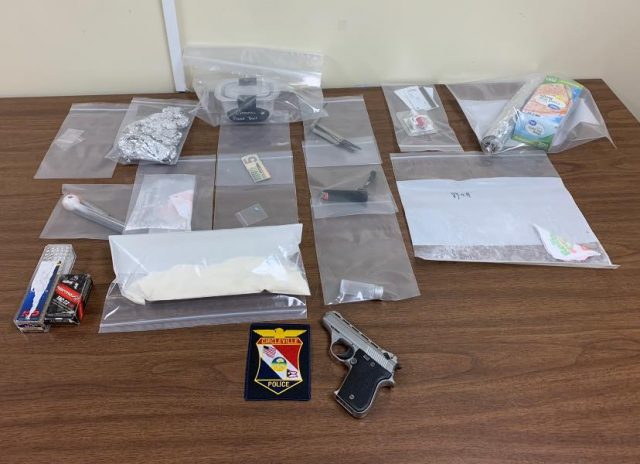 On the morning of January 13, 2022, Circleville Police Department was attempting to locate a missing female juvenile. During the investigation information was received that the juvenile was possibly in the area of South Court St. waiting for a ride out of town.

While searching for the juvenile, CPD detectives located a suspicious car lingering on the lot of Sheetz. Detectives requested marked units to make contact with the driver. Officer Estrada and Sergeant McIntyre arrived on the scene with detectives. Officers made contact with the driver who refused to identify himself or give any reasons who or what he was waiting on. Drug paraphernalia was observed in plain sight in the vehicle and the driver was asked to step out. The driver rolled the window up and accelerated away from officers at a high rate of speed.

The suspect refused to open the door and exit the vehicle. Officers were forced to break the window to unlock the door and remove the suspect. A .22 caliber handgun was located on the floorboard in plain view by the gas and brake pedals. A high quantity of powder believed to be narcotics along with narcotics paraphernalia was found.

The suspect refused to identify himself and was identified as Peter T. Hayes, 34 of Columbus by court documents in his vehicle. Peter was found to have multiple warrants for his arrest including Possession of Dangerous Drugs, Failure to Appear, and a Fleeing.

Detectives were able to weigh and test the suspected narcotics from the vehicle. Located and tested were 177.5 grams of N, N-Dimethyltryptamine also known as DMT, 1 gram of Methamphetamine and 1 gram of Fentanyl.

Dimethyltryptamine, or DMT, is a hallucinogenic drug that comes in the form of a powder. The confiscated DMT is 17 times the bulk amount of Schedule I narcotics and has an estimated street value of over $53,000.00 per a 2021 case study.

Mr. Hayes was arrested on the following charges and transported to the Pickaway County Jail after he was released from Ohio Health Berger Hospital: 3 counts of Trafficking in Drugs, 3 counts of Possession of Drugs, Weapons Under Disability, Carrying Concealed Weapons, Improperly Handling a Weapon in a Motor Vehicle, 2 counts of Felonious Assault, Vandalism, and Failure to Comply.

Officer John Merritt was treated on scene and released for a possible Fentanyl exposure. Sgt. David McIntyre was treated at Ohio Health Berger Hospital for a head injury and released.

We are fortunate this potentially dangerous situation was able to be resolved quickly with no serious injuries. Additionally, we would like to thank the Pickaway County Sheriffs Office, Ohio State Highway Patrol and the Circleville Fire Department for their assistance in this matter.