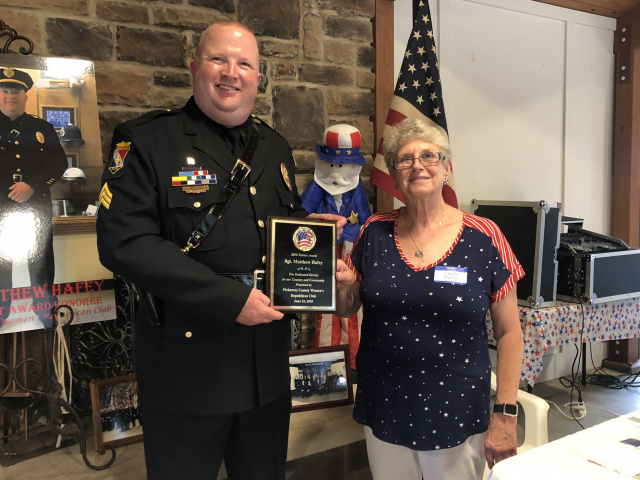 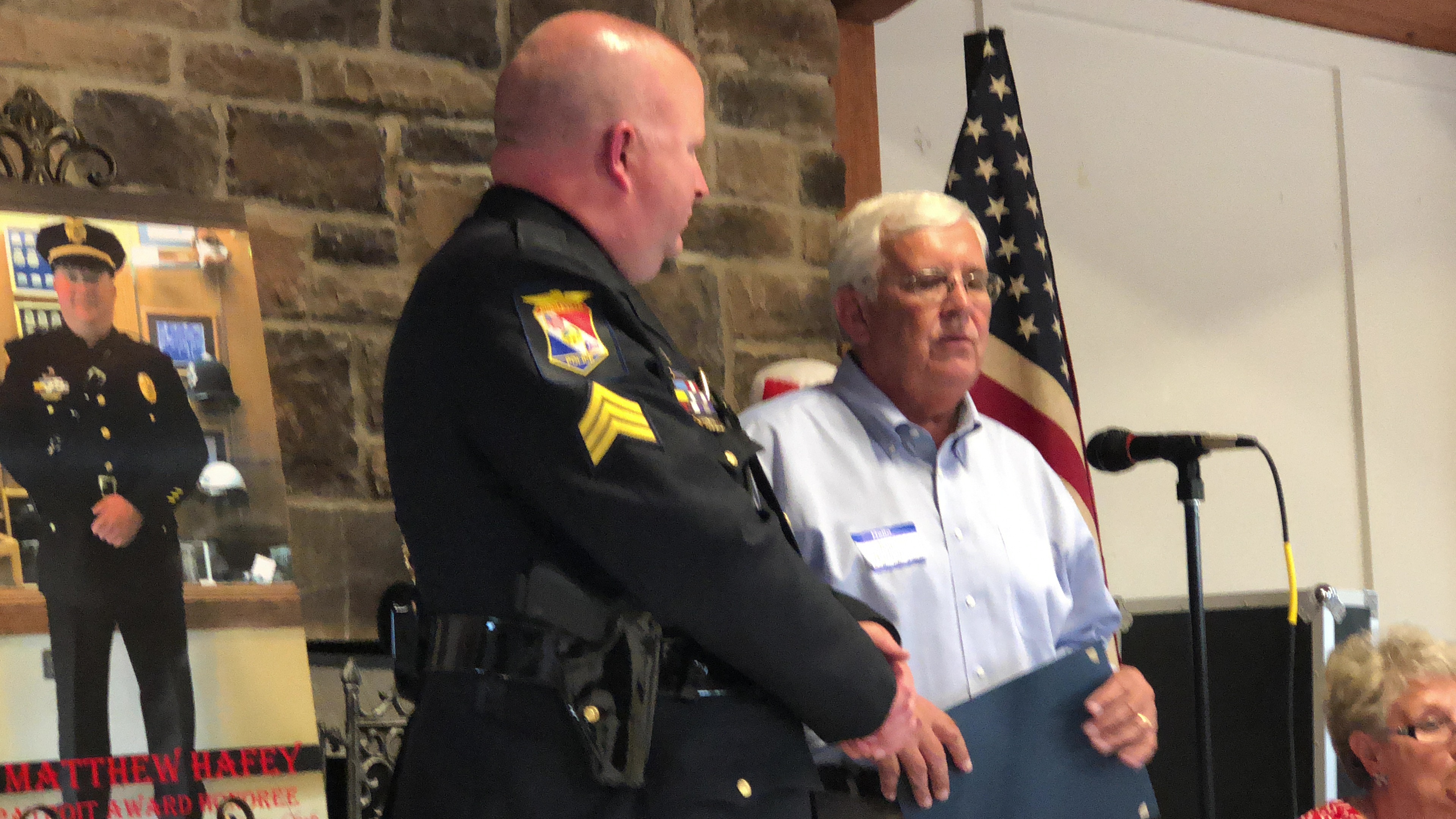 Circleville Police Chief Shawn Baer recognized Hayfe as, “A unique officer to have, of course in all the positive ways.  Baer went on to say, ” I’ve been blessed to have a department of really dedicated men and women.  He’s defiantly an example of what a police officer should look like.  He’s also one of the few people who has the perspective of having worked as a dispatcher and an officer.  Matt really takes community involvement to his heart, everyone in the department knows how he feels about Haven House and Foundations4youth.” 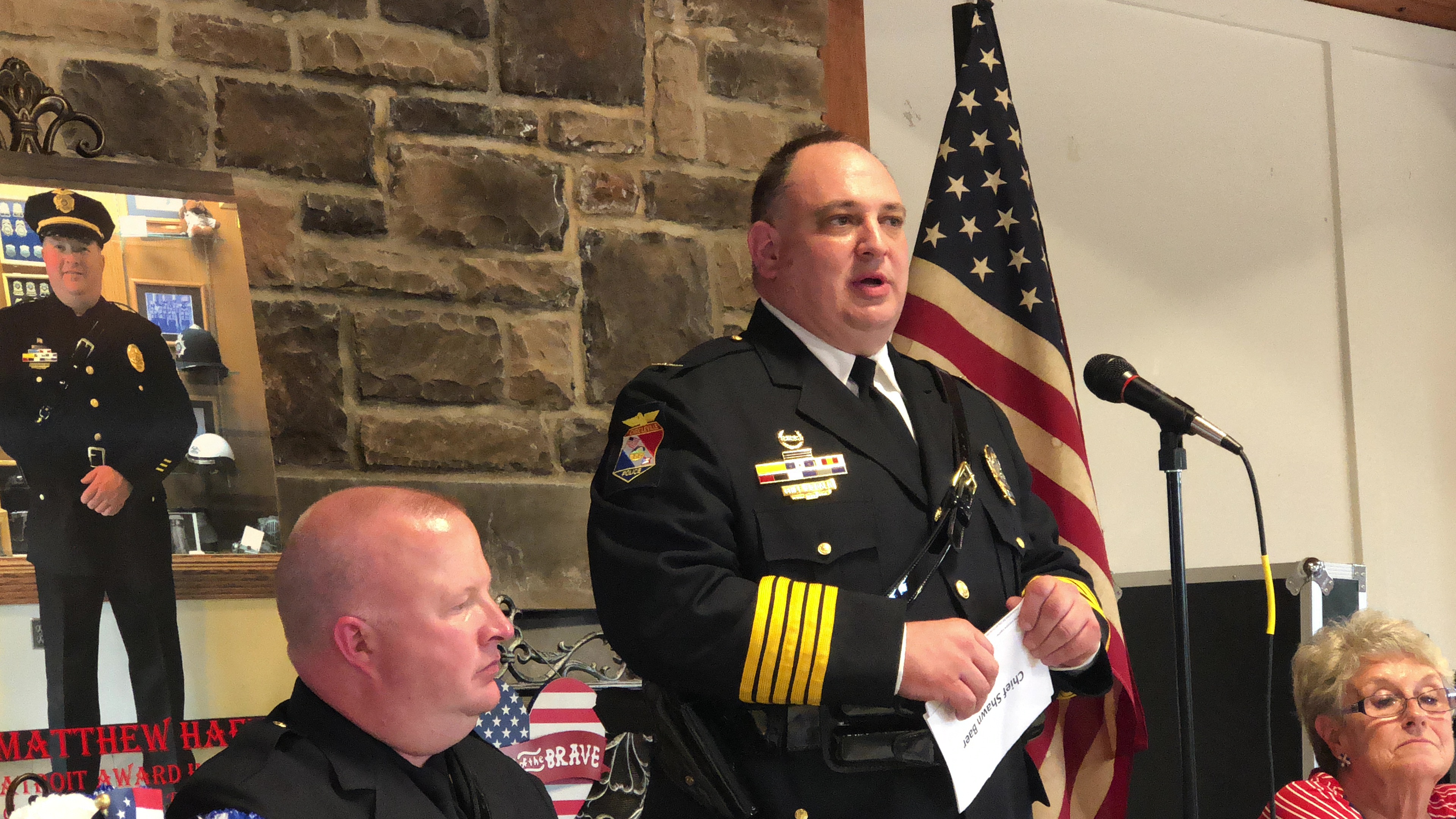 Pickaway County Women’s Republicans  Wendy Gardner gave a biography of Hafey’s life, “Sergeant Matthew Owen Hafey is our 2018 Patriot Award Honoree for Community Service Excellence, son of Luther and Sally Hafey. Raised in Pickaway County since age 5 and is a Teays Valley High School Graduate.  Sgt Hafey became a Cub Scout, Pack 744 of Ashville in 2nd grade, a Boy Scout, Troop 159 of Ashville in 5th grade and an Eagle Scout at the age of 16 (less than 5% of Boy Scouts make an Eagle Scout Rank; it takes these young individuals dedication in providing community hours and service, provide leadership roles and earn an abundance of merit badges (57% of astronauts are Eagle Scouts). Sgt Hafey also joined the Explorer Scouts Post 130 of Circleville for two years providing additional community service and enjoying high adventure activities.  Sgt Hafey believes himself to have been shy and backward during his school years, playing the drums in Band and being introduced to hunting at age ten by his father. He is a hunter enthusiast and still enjoys hunting with his father today. 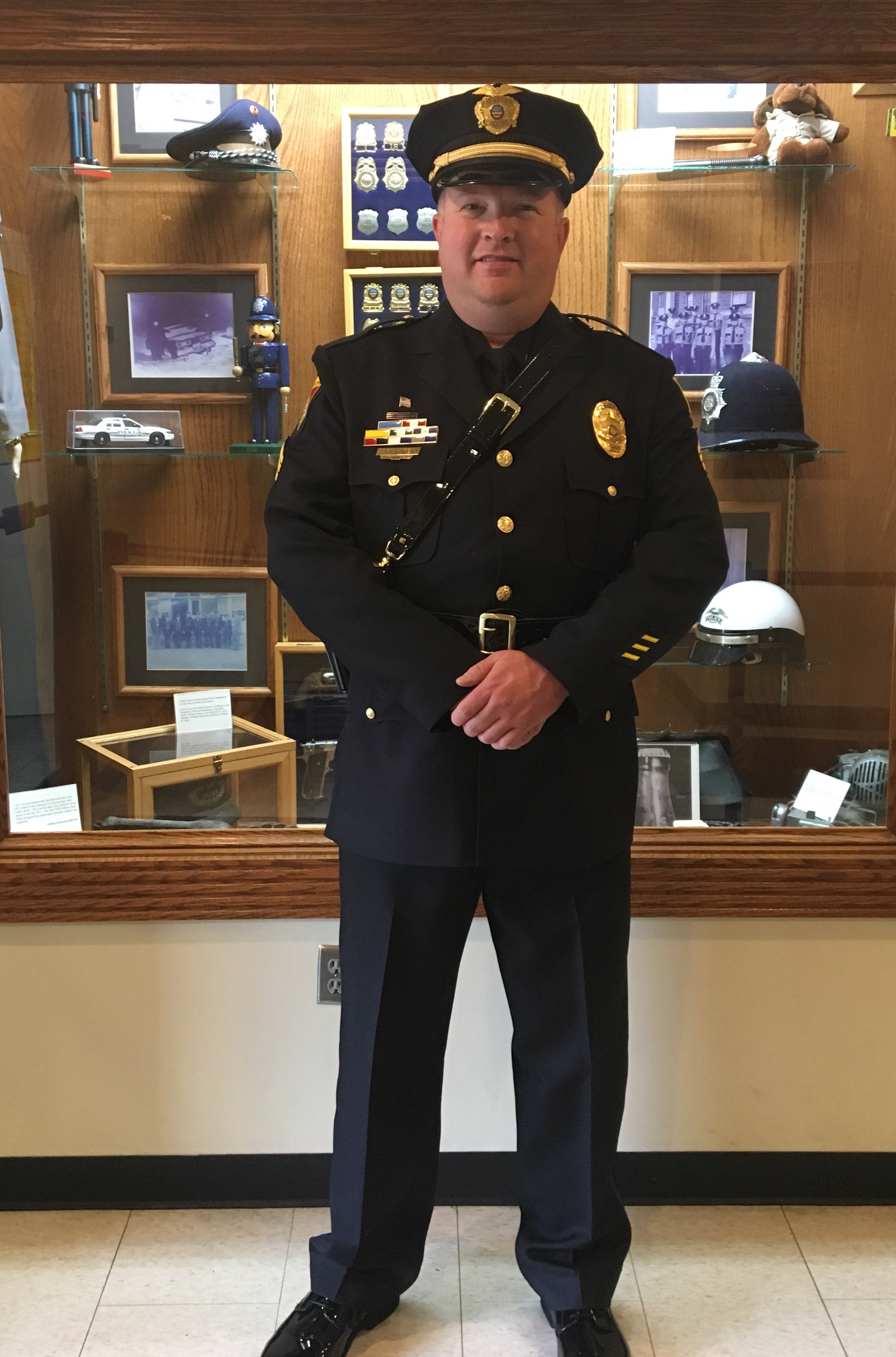 After graduating from high school, Sgt Hafey enrolled in college at Columbus State; only going for one year and taking general classes. Unsure of what he wanted to do, he enlisted in the Navy in December of 93’.  Entered the Navy as an E2, Seaman Apprentice (Eagle Scout Promotion) doing Bootcamp at Great Lakes Illinois and training as a Radar Operator.  During his Bootcamp training, the Navy was recruiting for the United States Navy Ceremonial Guard Duty, and Sgt Hafey volunteered; he was interviewed, background screened and selected.  During his four years in the Navy from 1994 to 1998 his first two years he was stationed at Naval Station Anacostia in D.C. pulling duty as a US Navy Ceremonial Guard. Duties varied and included Honor Guard Duty at Arlington Cemetery for Funerals, Presentation of Colors for Foreign Dignitaries and other White House Arrivals. During this time he was chosen for the Pentagon Tour Duty which he served an eight-month duty providing Pentagon Private and Public Tours.

When asked about his experience he replied: “a 21-year-old kid standing next to the President of the United States; I thought that was the coolest shit in the world.” 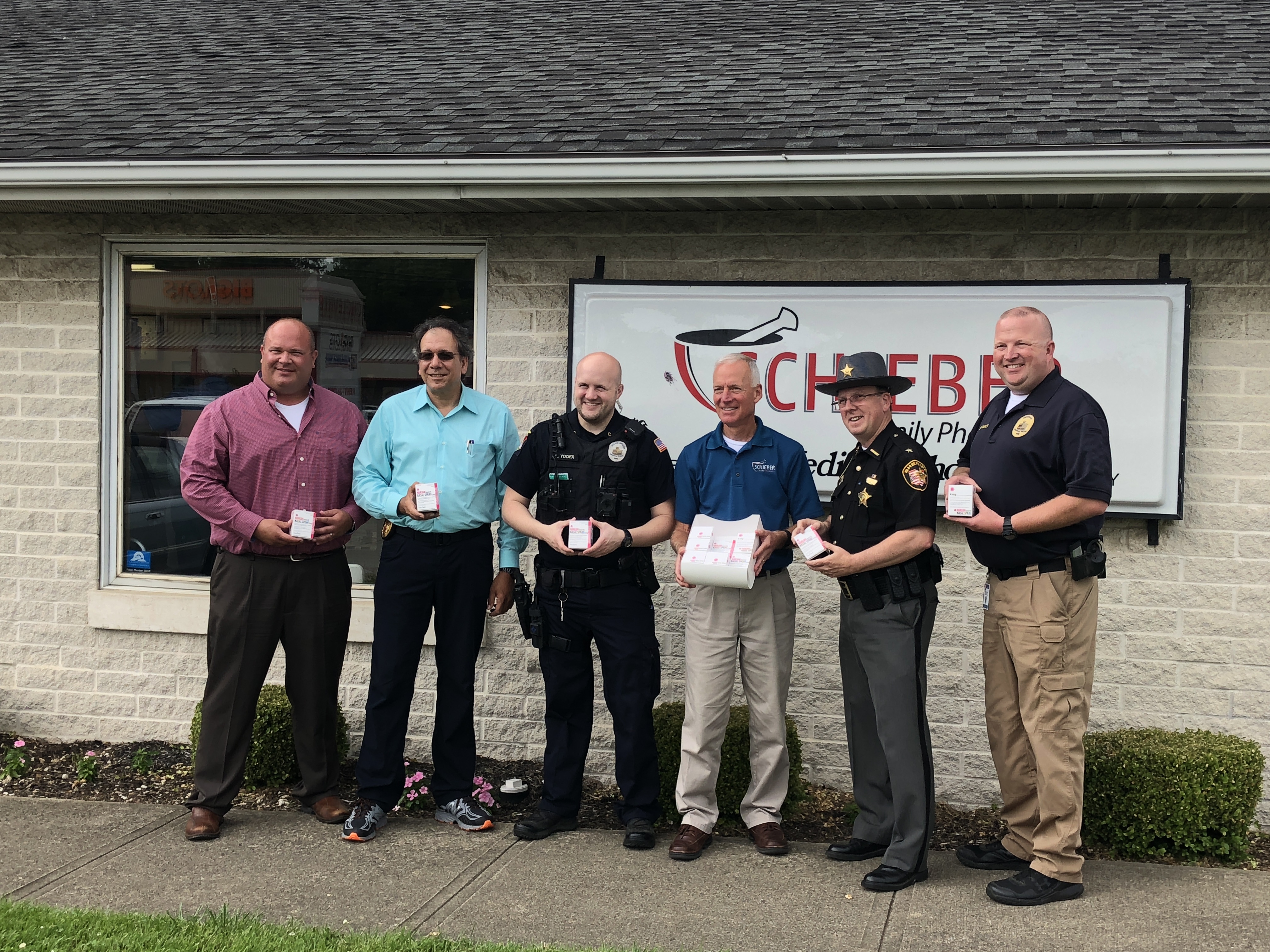 During his two year duty in D.C. Sgt Hafey got promoted to E3, Seaman and studied for the Petty Officers Exam, passed and got promoted to E4, Third Class Petty Officer in the Navy.  He also took a part-time job at a gas station pumping gas for extra cash.  The gas station mechanic taught Sgt Hafey about working on cars, and he said; quote, “Hell I’ve saved thousands of dollars over the years from that mechanic and I love doing stuff like that.”

After D.C. he finished his last two years as a “Tin Can Sailor” stationed out of Norfolk, Va on the USS Peterson Destroyer working as a Radar Operator. The USS Peterson’s mission was to find drug runners out of South America.  While doing his tour, Sgt Hafey became a Shellback, Order of The Ditch and got promoted to an E5 2nd Class Petty Officer.  Sgt Matthew Hafey received a Joint Service Achievement Medal for the work at the Pentagon, a National Defense Medal for joining the military during a conflict, a Good Conduct Medal for (4) years outstanding service and a Sea Deployment Ribbon for being gone for (6) months. 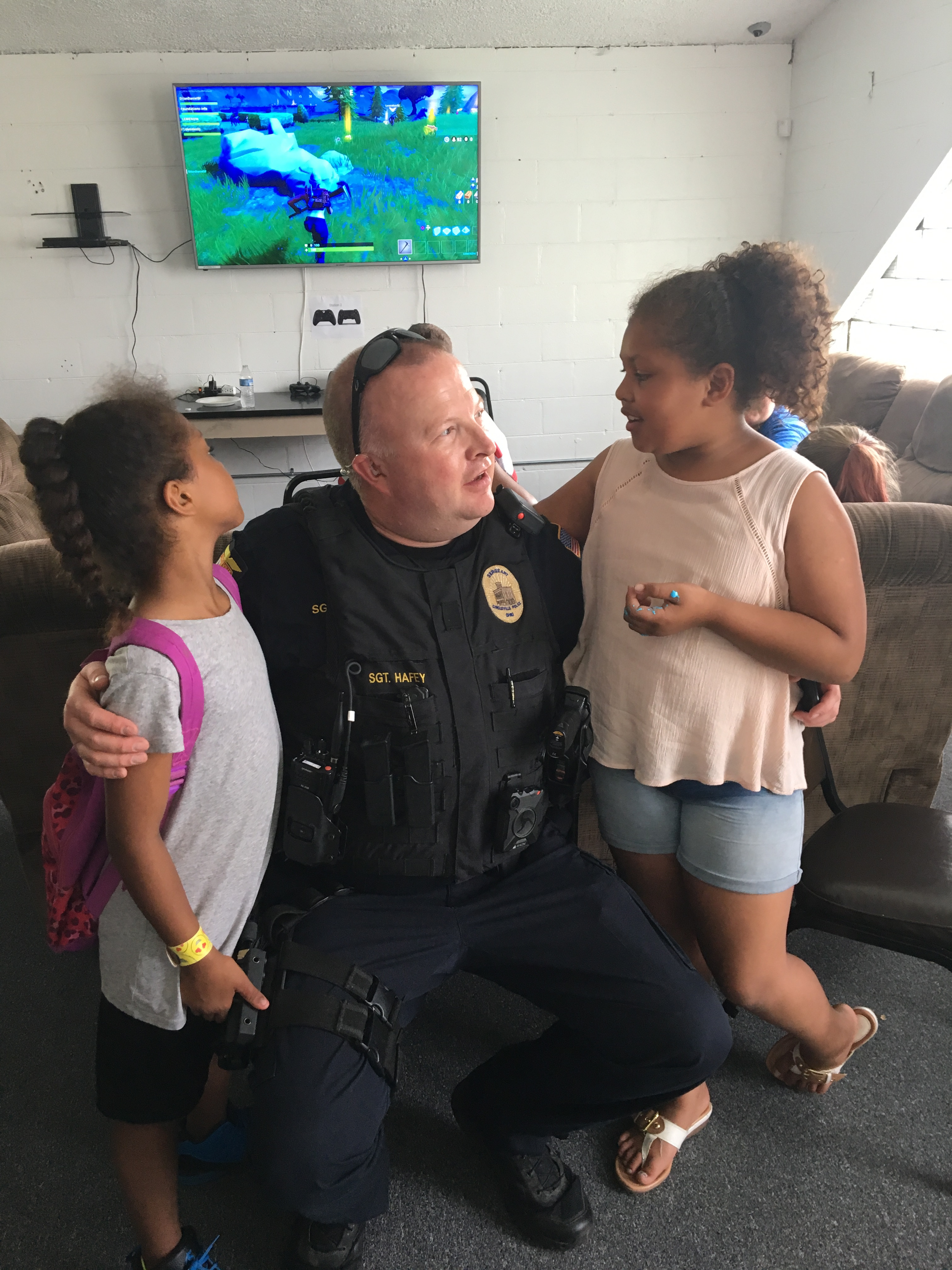 After being discharged, Sgt Hafey came home to Pickaway County and took a job at Bob Evans. While working at Bob Evans, a business meeting was being held, and Sgt Hafey was waiting on their table.  He spilled coffee on one of the gentlemen in the conference and was asked if he was stressed, Sgt Hafey replied “No Sir, I just got out of the military and waiting tables doesn’t stress me out,” the man gave Sgt Hafey a job! He worked from 98’-2001 for Lofland Company in their sales department selling construction materials.  During this time; he met his wife Jami, moved to Indianapolis, IN and married in 2000.  In 2001 Sgt Hafey became a father and had a baby girl, Elizabeth Karen Hafey.  In 2001 Lofland Company closed and Sgt Hafey went to work from 2001-2002 for one of Lofland’s competitors.  In 2002 he changed jobs to become a truck driver for Crystal Flash Petroleum.  In 2003 Sgt Hafey got divorced and came back home.

May 25, 2003, Sgt Hafey became a dispatcher at the Circleville Police Department.  While dispatching, he enrolled into the Police Academy in Chillicothe, Ohio on his GI Bill.  He graduated from the Academy in November of 2004 and became a Reserve Police Officer.  Still working full time as a dispatcher and volunteering as a reserve officer Sgt Hafey enrolled at Ohio University majoring in Law Enforcement Technology.  May 6, 2005, Sgt Hafey became a full-time Police Officer with the Circleville Police Department.  In 2006 he graduated from Ohio University with his associate’s degree in Law Enforcement Technology.  In 2015 he was promoted to Sergeant.  Since being home and working at the Circleville Police Department Sgt Hafey has received several awards, in 2007 he was nominated Officer Of The Year, In 2012 and 2014 MADD acknowledged him for efforts in DUI’s and was given an award For His Continued Leadership In Traffic Safety Initiatives and The Prevention Of Traffic Related Deaths as well as the Drive Sober Or Get Pulled Over Campaign, For His Efforts In The Law Enforcement Of Impaired Driving Laws and Saving Lives On Pickaway County Roadways and Haven House acknowledged him with a Certificate of Appreciation during National Crime Victims Rights Week.

Sgt Matthew Owen Hafey has spent his life serving his community from his time in Cub Scouts as a youngster to Sergeant of the Circleville Police Department.  Whether in inform or not, Sgt Hafey gives of his time and involvement to two of his favorite charities. He serves on the board of Haven House, Haven House of Pickaway County, Inc. is domestic violence and homeless shelter.  They strive to empower survivors of domestic violence by providing advocacy, housing, support and safety planning.  Providing shelter for homeless women and children as well as crisis intervention, case management, legal advocacy, referrals, support groups, individual counseling and much more.  All services are free. Sgt Hafey is very much involved with the “Foundation 4 Youth Center” which is a new community-based children’s center, it opened April 3 of this year and is located at 457 East Ohio Street in Circleville.  It was a concept originated by the Circleville City Police Officers and partnered with Pars and Circleville City Schools.  The center currently is opened on Tuesdays from 3-9 and accepts ages 5-19. Transportation is offered both to and from the center for all children. The center is a well-needed place for our kids; promotes police and civilian relations, offers a safe place for the kids where they can just be a kid.  The goal for Sgt Hafey and the other officers is to help save a life, “if we can at least save one child from following down that path or give them the opportunity to grow and flourish and become a productive member of society, then everything we do is worth it” (quoted from Sgt Hafey, WBNS-10TV Article 4/02/2018).  I had the opportunity to visit the center; while attending, it became apparent that the relationship between the kids and police officers were normal and genuine; to them, it was a normal atmosphere for both.  Both, kids and police officers were interacting in a variety of activities from slim art, video games, guessing games, eating pizza together or just hanging out. It also was not unusual to see random police officers stopping in to say hello to the kids and grab a piece of pizza; even the chief of police would pop in, as he did while I was there! Seeing Sgt Hafey smile and his interaction with the kids is a testament to his character.

After getting to know Sgt Hafey, I concluded that he never meets a stranger. He has a wonderful sense of humor and displays it often.  He is willing to listen to others; offers help and assistance or just gives a smile and hug.  When I mentioned this to him, he smiled in a devilish way and said: “it’s the gift of the hillbilly.” In his spare time, Sgt Hafey enjoys riding his Harley Davidson Motorcycle; he has put many miles on his bike, he says it is a stress relief for him. He has been a member of the “Roughnecks” Motorcycle Club since 2014, a brotherhood of first responders who ride. The brotherhood often raises money for charities and currently raising money for COPS (Concerns Of Police Survivors) a charity which provides services for families of officers that are killed in the line of duty.  Sgt Hafey adores his daughter and is a proud father. He loves to talk about her and enjoys spending time with her. He doesn’t get much time with her because in his words she is your typical teenager; working, goes to school, cheerleading, track, active in church and of course friend time.  Elizabeth; now 16 wants to be called Lizzy, Dad was having a difficult time with this but is slowly coming around! Sgt Hafey belongs to Trinity Lutheran Church here in Circleville, has a 10.5-year-old female Boxer named Harley and wants to hunt Turkey which he has not done yet.  Sgt Hafey whether in his work profession, the charities he is involved in or during his spare time is always giving of himself. Sergeant Matthew Owen Hafey lives by these words “Always Do The Right Thing Because If You Do The Right Thing, You Can Never Be Wrong.”

I have had the pleasure to meet Sgt Hafey, and now I am honored to be able to call him a friend!”