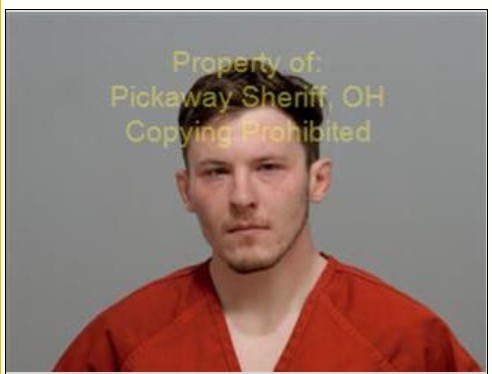 According to the Circleville, the Police department dispatched reported that a man walked into the lobby of the local police department and passed out on the floor. Two officers Salyers and Fisher were called to the scene to investigate.

When the officers attempted to wake the man identified as Joshua Raines up he yelled in an aggressive manner and smacked the officer, “who the f_ck do you think you are.”

Officers in their report said that the man had a very strong odor of alcoholic beverage and believed he was under the influence.

The officers then commanded the man to stand up, when he did, he got aggressive and in the face of one of the officers. In the report the officer says that he had to put his hand on the man’s chest to keep him at a distance, that reaction made the drunken man push the officer back. Officers then attempted to arrest the suspect and put him in handcuffs.

Officers then had to pull a taser to threaten the man that he had to stop resisting or be tased.

“I then performed a warning arc with the taser. At this moment Joshua started to comply and rolled over onto his stomach. I had Joshua’s left arm behind his back and Sgt. Fisher and I were able to get his left wrist into a handcuff and when attempting to grab his right arm Joshua started to squirm and got onto his back. When Joshua got on his back he then kicked Sgt. Fisher once on his right side of his face and then kicked again hitting the left side of his face. (Photos have been documented). I then backed up and pointed my taser at Joshua but Joshua sat up and started to calm down. I then grabbed him by his right arm in the escort position and assisted him to the ground again and placed it behind his back. Joshua was placed in handcuffs and transported to the Pickaway County Jail without incident.”

Joshua will face charges of Disorderly Conduct by intoxication, Resisting Arrest, and Assault On A Peace Officer.