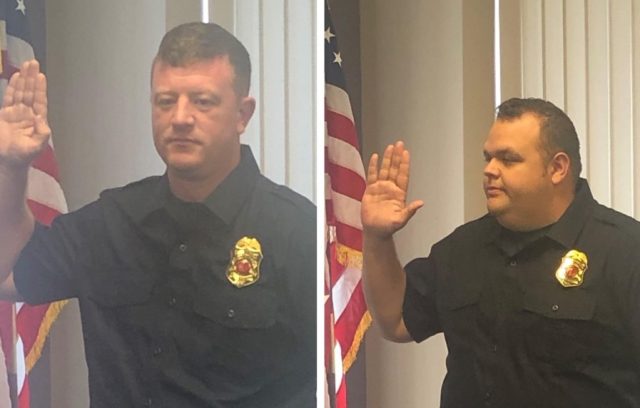 CIRCLEVILLE – Circleville Fire Chief Brian Thompson says that the department can now move forward with promotions now that they have minimum staffing.

The City of Circleville when attempting to balance the budget last year unfunded several part time firefighter positions and a Captains position. Since then citizens voted for a safety levy refunding Fire and Police positions.

“By the end of October we will have our rank and file in order, and this is the first time since I started here in March of 2019,” said Chief Thompson,” but we are in a good place right now, we have a young family of firefighters here now.

Currently Circleville Fire department is made up of firefighters of less than four years experience. “You can feel a little uncomfortable with less experience said Thompson, but you can take a lot of stock in who helped train them.”

“Captain Reese performed as an acting captain to fill in the gap when we did not have the position, he did a tremendous job with his shift so his promotion was easy. The day to day operations are lead by the Captains, they are what is keeping the fire department operating smoothly. As a administrator I’m in a lot of meetings so those guys know their job and do it very very well.”

Captain Shroyer is also our training officer, he sets up all the training department wide. He also handles new candidate training.  With the minimum staffing we are able to offer two weeks of orientation now, vs learn as you go on shift we had before. Shroyer was working overtime getting the guys trained up keeping training together he deserves those props.”

Both Captains were trained by Captain Cavanaugh says Thompson. “He has been a very effective teacher, and ill put him on a pedestal. The guys have watched how he has operated his shift effectively and efficiently and putting the people first on input, training, things like that. The two mentioned above are in very good position because of his leadership.” Captain Cavanaugh has 14 years with the Fire Department.

Thompson said that he will most likely have rank and file in order by the end of October, the first time for him since he took the Chief position.

“I have enough faith in my officers now that when I show up on the scene I don’t always have to take command because I’m there.  I usually ask them if they need me and we work forward from there. I am very fortunate to come in with the employees when I came into the department. When I came into this position these guys surrounded me and helped me get comfortable here by carrying some weight while I learned the position. I cant say one bad thing for the six people we have coming up for the next positions. These guys don’t make Columbus money they are here because they like the job, and Circleville is in a better position because of them.”