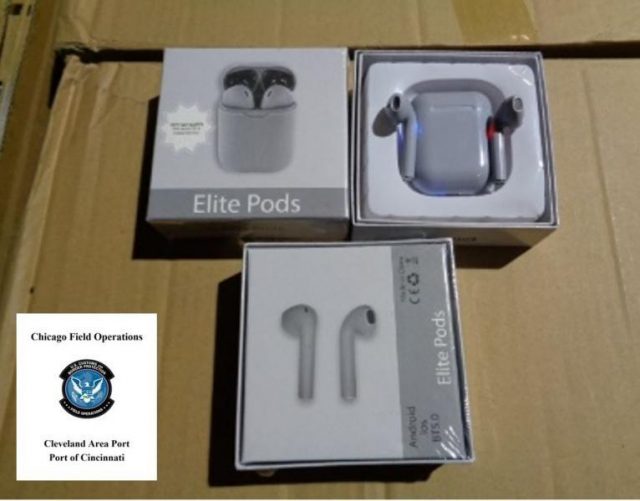 OHIO – According to a release from U.S. Customs and Border Protection (CBP) officers in Cincinnati a large shipment of fraudulent items were seized recently in Ohio.

On May 6, U.S. Customs and Border Protection (CBP) officers in Cincinnati inspected three large shipments from China and found what appeared to be tens of thousands of earbuds in violation of Apple’s protected configurations. After consulting with an import specialist from CBP’s Center of Excellence and Expertise, the items were found to be in violation of CBP trademark and copyright codes and were declared seized on May 11 and 13.

Apple has configuration trademarks on their AirPods and has recorded those trademarks with CBP. Furthermore, a company does not have to put the “Apple” wordmark or design on their products to violate these trademarks. In this instance, further inspection of the earbuds revealed that their shape and design replicated the protected Apple configuration.

Each shipment contained 12,000 fake AirPods, for a total of 36,000. Although each package had a declared value of $5,280, the Manufacturer’s Suggested Retail Price for all the AirPods would have been $7.16 million had they been genuine. The shipments were destined for an address in Dayton, KY.

“Counterfeit products can be deceiving at first glance,” said Cincinnati Port Director Richard Gillespie. “They’re often cheaper and can appear very similar to the real thing. However, inferior products can end up costing consumers more than if they purchased the genuine item because of the high likelihood of substandard materials and malfunctioning parts. Supporting legitimate businesses is the smart choice, and buying from trusted companies protects against potential human rights violations and damage to our economy.”

There are several ways consumers can protect themselves from purchasing fake merchandise. Companies often publish lists of authorized retailers online, and consumers should be aware that purchasing from an unauthorized vendor could easily mean the product is fake. Read all labels and check serial numbers or other forms of authentication with manufacturer databases. Additionally, using common sense about purchases that seem so cheap they are “too good to be true” can prevent consumers from wasting their hard-earned cash on an inferior product. Although fake products may be cheaper, supporting illegitimate enterprises can be far more costly than the real thing.