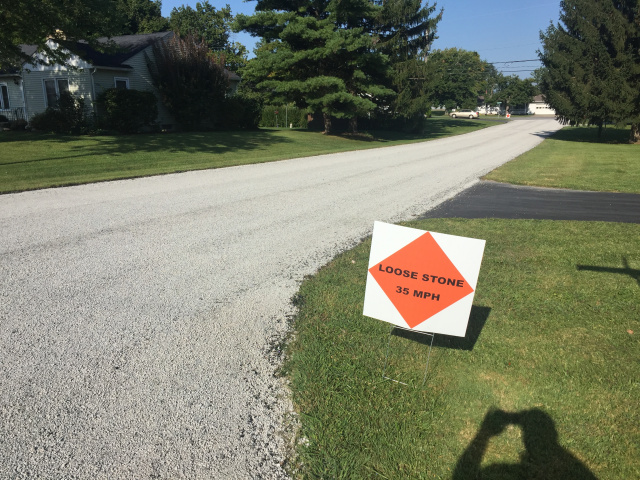 Many have noticed a different kind of resurfacing project going on in Circleville. It is called “Chip Seal” which also goes by a few other names; chip-and-seal, seal chip, macadam, or liquid-asphalt-and stone. Chip sealing is much more cost effective than asphalt which saves the City of Circleville money.

However, some residents have complained saying it “looks bad” and they “don’t like how it is installed.” Mayor Don McIlroy said, “Wait till it’s done.”  The mayor continued, “I want to hear the people’s concerns – have them call me.”

The Ohio Department of Transportation explains how chip seals are different from traditional asphalt overlays: “The difference is in the construction method. Hot Mix Asphalt pavement is produced by heating liquid asphalt and mixing it with aggregate, with the mix then spread and compacted to form a durable road structure and riding surface. Chip sealing uses the same ingredients as asphalt concrete paving, but the construction method is different.”

With chip seals, a thin film of heated asphalt liquid is sprayed on the road surface, followed by placing small aggregates (“chips”). The chips are then compacted to orient the chips for maximum adherence to the asphalt, and excess stone is swept from the surface.

A mile of chip seal costs about $32,000, compared to $250,000 or more per mile for asphalt overlay, according to the Mason-Washington Public Works Program. How do the residents of Circleville feel about this change in road-works policy? Let us know in the comments section here, or on Facebook.