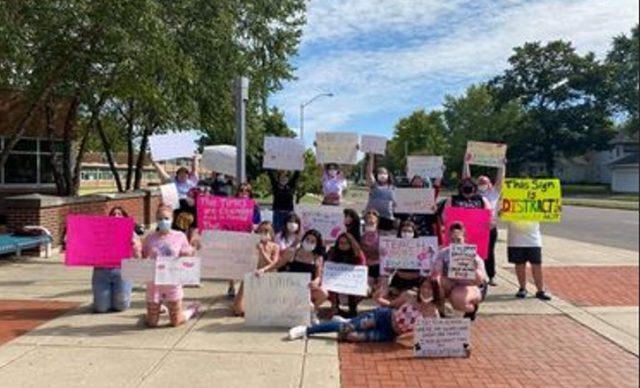 CHILLICOTHE – Over Twenty girls stood in solidarity after school today in front of their peers protesting the high school dress code.

One Sophmore said that she feels that the dress code is sexist and girls are being targeted by the school staff more than boys and that’s why she’s speaking up.

“It all started when teachers and staff at our school started dress coding girls for minor dress code infractions such as small rips in jeans and belly shirts (that were allowed last year) and we started to get upset.”

When the student started talking more to her high school friends about it they started to share their stories.

“Another student at our school was given a severe warning for wearing a black turtle neck tucked into non-ripped jean pants. the staff member said it was “too form-fitted” which is not stated in the dress code.”

The student said she created an online petition that had about 1000 replies, so she decided to protest in several ways respectfully. The student created a T-shirt that she wore into a school that said, “the dress code is sexist,” and she got some conversation going with teachers.

“One teacher and I had a respectful conversation about my views on the dress code but nothing changed. That’s when I decided to be more public about it and we held a protest. “

So on Friday after school, about two dozen students stood outside the high school with brightly colored signs protesting the dress code.

“I most likely will go to the board of education meeting on Wednesday and give them a presentation on what we would see change in the dress code.”

Some experts have criticized school dress codes targeting females, requiring the student’s attire to be modest in nature so it is not distracting to males. The argument in these experts opinion, “teach women that their bodies are “distracting”, we are essentially telling the student that their body and the way they’re presenting themselves is not okay.”

The dress code states that students cannot “reveal or show cleavage and/or undergarments,” which is a rule that unfairly targets the female student body. According to the Merriam-Webster dictionary, cleavage means, “the depression between a woman’s breasts especially when made visible by a low-cut neckline.” and undergarments can target bras, making it bias towards female upper coverings vs males.

This would mean that a woman could not wear a V-neck shirt but a male could wear the same shirt and it would be acceptable.

Chillicothe Handbook states what is deemed acceptable and unacceptable in their handbook to students below and it can also be accessed here: https://www.chillicothe.k12.oh.us/userfiles/42/my%20files/cms%20chs%202020-2021%207-12%20student%20handbook.pdf?id=5277