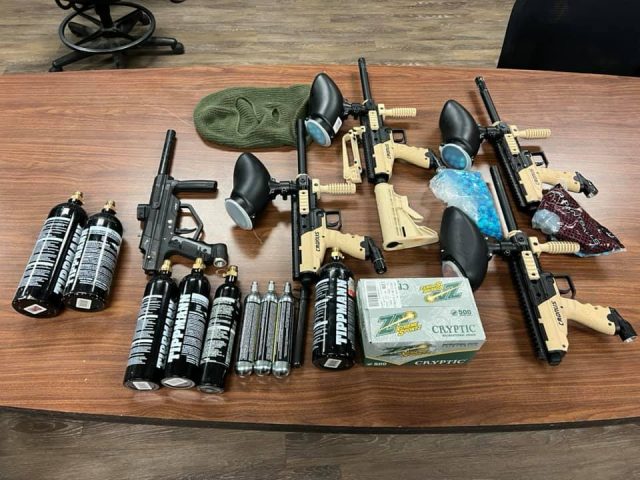 CHILLICOTHE – Over the past week or so Chillicothe Police have been looking for the culprits of paintball shootings all over town.

According to Chillicothe police incidents over the week have been reported of someone shooting paintball guns at each other and hitting people’s personal property in drive-by type shootings. On 11/10/21 some of the people responsible were caught.

Around 10:40 pm on 11/09, Chillicothe police started an investigation after getting a report of shots fired in the area of 540 Arch Street, when they arrived they received a report from two area residents that three vehicles pulled up and got out and started shooting paintball guns in the area, some at each other and some at the personal property including vehicles defacing them.

The break in the case came a day later on 11/10 when police were dispatched at 5:43 pm when multiple people called reporting the same incidents people driving around and shooting paintballs at each other’s cars and hitting other people’s property. One of the officers found a vehicle driving that had paintballs splatter on the drivers’ side and made a traffic stop. Inside the car was three individual drivers, Desean Branson, front passenger, Andrew Cunningham, and back passenger Isaiah Allagree. Inside the vehicle was five paintball guns, there were also bags and a box of paintballs inside, consisting of blue and orange paint. Several Co2 cylinders were located as well, including ones that were currently attached to the paint ball guns.

The men told police that they were shooting at each other throughout the city from cars and sometimes parking lots and did not realize they were hitting others property.

All three were charged with of discharging a firearm (air gun) in the city limits.