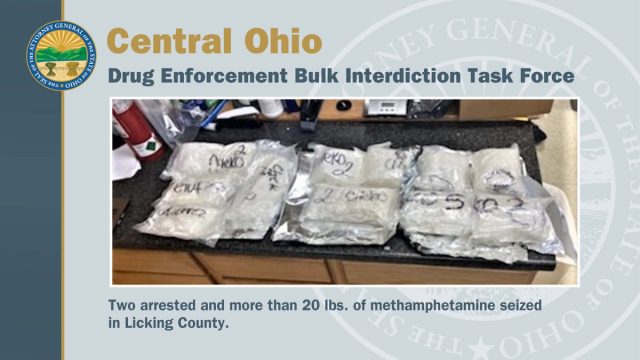 “This alarming quantity of meth is representative of the increasing trend seen by law enforcement – ‘one pot’ labs are being displaced by traffickers who distribute death in bulk,” Yost said. “I’m grateful for the work of task forces like this one who seize drugs before they reach our communities.”

Shawn B. Harmon, 44, and David Johns, 46, both of Buckeye Lake, were arrested on felony drug trafficking charges following the investigation, which was conducted by the Central Ohio Drug Enforcement (CODE) Bulk Interdiction Task Force. Additional charges are anticipated in the case.

In total, the investigation netted 24.5 pounds of suspected methamphetamine from the Hebron and Heath areas in Licking County along with an additional seizure Fairfield County. The seized drugs have an estimated street value of over half a million dollars.

“This is a significant amount of an illegal and dangerous drug that has been taken off the street,” Sheriff Thorp said. “The collaboration of state and local resources continues to have a positive impact in our communities.”

The CODE task force is one of the task forces created by the Attorney General’s Ohio Organized Crime Investigations Commission. The task force is funded through Gov. DeWine’s RecoveryOhio, in concert with the Ohio Department of Public Safety and the state Office of Criminal Justice Services.

“We know that when we take drugs off the streets, it makes our communities safer. That’s why it is important that we continue to collaborate with local law enforcement to conduct thorough investigations such as this,” said Gov. DeWine. “This ongoing effort is making a difference, and our combined efforts will continue to target drug traffickers who are responsible for bringing drugs into our communities.”