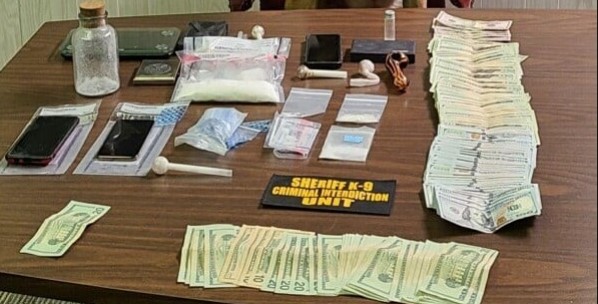 BELMONT County – Belmont county sheriff says that the signifigant amount of drugs captured this week is, ” by far the largest seizure of meth in the history of Belmont County”

Charles McGhee, 61, of Bellaire, was arrested on felony charges of drug trafficking, drug possession and possessing a weapon under disability. Deputies seized 9 pounds of suspected methamphetamine, 6 ounces of suspected cocaine, $3,861, and a loaded firearm.

“This new task force is focusing specifically on intercepting drugs from large-scale drug trafficking organizations and drug cartels in this region, and these investigators are off to an impressive start,” said Governor DeWine. “I appreciate the hard work of all of our law enforcement partners who are working to keep Belmont County and the surrounding area safe.”

The arrest was made as part of an ongoing investigation conducted by the Belmont County Major Drug Interdiction Task Force, part of the Ohio Organized Crime Investigations Commission. The task force is funded through Gov. Mike DeWine’s RecoveryOhio, in concert with the Ohio Department of Public Safety and the state Office of Criminal Justice Services.

“This is by far the largest seizure of meth in the history of Belmont County,” Sheriff Lucas said. “I am extremely pleased with the hard work and dedication of the detectives assigned to this unit in partnership with the Ohio Organized Crime Investigations Commission. I look forward to our future successes.”

The Belmont County Major Drug Interdiction Task Force is led by the Belmont County Sheriff’s Office and is assisted by the sheriff’s offices of Guernsey and Harrison counties and Homeland Security Investigations.

Ohio Attorney General Dave Yost made a statement on the event, “Every narcotic seizes that puts a trafficker in jail is a step in the right direction in removing deadly drugs from our communities,” Yost said. “This newly-formed task force is already a force to be reckoned with – hats off to Sheriff Lucas and the whole OOCIC team for their success.”