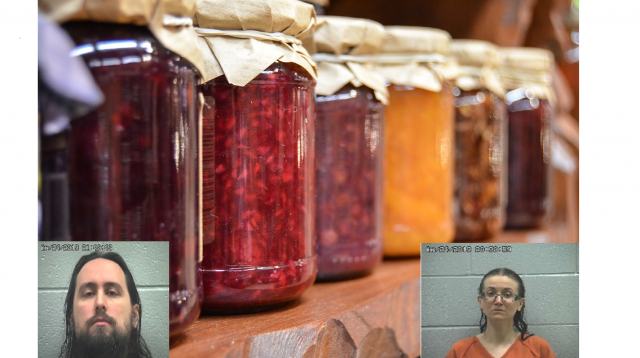 A 13-year old boy was discovered in Gallion Ohio, claiming to have escaped his parent’s household and an extreme vegan diet that left him at just 65 pounds, and extremely malnourished, requiring immediate hospitalization.

Crawford County Prosecutor Matt Crall told reporters that “The child had a very strict vegan diet that consisted of almonds, bananas and grapes. He had to have everything eaten in 30 minutes.”

The parents, Katrina, his step-mom, and John Miller were indicted on first-degree felony charges of kidnapping, a felonious assault charge, and two counts each of child endangerment along with a host of other charges. If the parents were convicted on all standing charges, they would serve over 20 years in prison.

Prosecutor Crall explained the kidnapping charge involving their own child as “Normally, you don’t think of kidnapping as involving someone’s own child. But when you knowingly restrain the liberty of another person for the purpose of terrorizing or to inflict serious physical harm — that’s what happened in this situation. That’s what we’re alleging; that he was kept there, he had attempted to flee once before, he was fleeing when he was found, and he was emaciated to the point of having been terrorized, and to the point where he’s going to be hospitalized for quite some time.”

The child’s diet consisted of only 3 vegan foods: Bananas, grapes, and almonds. To further the extreme regimen, he was forced to eat his entire day’s worth of food in 30 minutes.

The 13-year old boy was rushed to Children’s Hospital for malnourishment as well as refeeding syndrome, as the hospital is having to re-establish food introduction to the teen, as his body had rejected foods prior to hospitalization.

This was not the teen’s first trip to a hospital for a major issue, however, as the child had lukemia when he was 4 years old. The parents, however, failed to continue to take the boy to follow-up visits to ensure he was cancer-free and healthy.

According to Prosecutor Crall, the boy “The child was very self-conscious about the way he looked, and he would wear multiple sets of clothing to cover up the fact that he looked the way he did.” – the teen was only allowed to venture outside to church and was homeschooled. When he escaped, according to authorities, he fled to Gallion Ohio to seek help at a residence, who then called authorities, alerting police to the abuse by the radical vegans.

The Miller’s were arraigned on Monday, September 9th 2019 and were served a $500,000 bond for each the husband and wife in Crawford County Common Pleas Court.