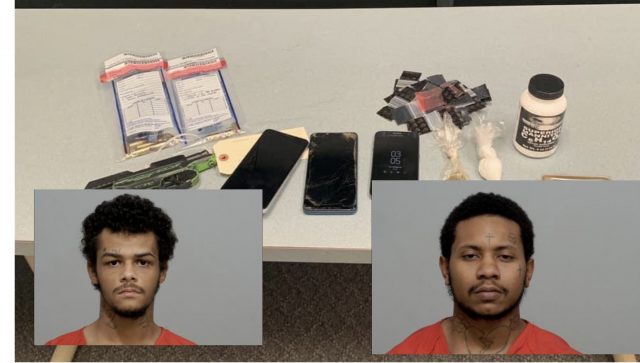 PICKAWAY – Sheriff Matthew O. Hafey is pleased to report the results of a traffic stop conducted in the morning of December 28, 2021. Sgt Kyle Eveland initiated a traffic stop on a blue Honda Civic on State Rte 104 in the area of Florence Chapel Pike. Deputy Seth Thomas assisted Sgt Eveland with the traffic stop.

As Sgt Eveland spoke with the driver, Thomas E. Burdette 20 years old out of Columbus, Ohio, he observed a handgun holster and a small bag of suspected marijuana sitting near the center console in plain view. Sgt Eveland removed Mr. Burdette from the vehicle and read him his Miranda Rights. Mr. Burdette was asked if there was a gun in the vehicle, to which he stated there was.

The two passengers were identified as Cortez D. Jones and Kyia M. Henry – both 20 years old from Columbus. After the occupants of the vehicle were secured, a probable cause search was conducted. Deputy Thomas located a loaded Ruger LC9 handgun in the area where Mr. Jones was sitting, covered by an umbrella. On the front passenger floor board was a purse which was found to contain a scale with white powdery residue and small baggies commonly used to package narcotics.Detectives from the South Central Ohio Major Crimes Unit arrived on scene and conducted field interviews. During the interview Ms. Henry admitted she had Fentanyl concealed in her clothing. Ms. Henry removed the suspected narcotics and turned it over to Sgt Stephen Harger. Upon checking the handgun through NCIC, it was found to be stolen from Ross County.

Sheriff Hafey would like to thank his Deputies, Detectives and the Investigators from the South Central Ohio Major Crimes Unit for a job well done on this traffic stop.