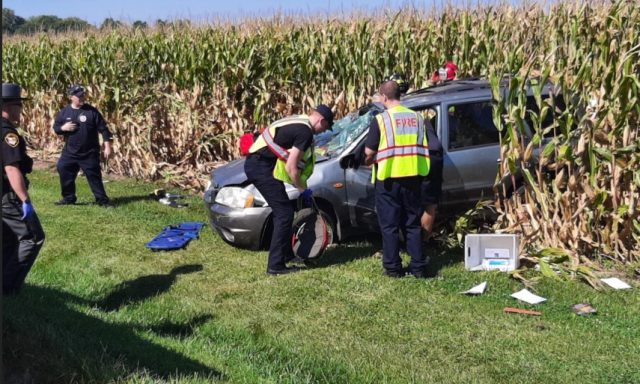 WILLIAMSPORT; Mail may be a little slow in the Williamsport area today after a rollover crash occurred in a mail truck around 11:20 am

According to law enforcement on scene, the personal vehicle used as a mail truck was heading Eastbound on 316 when the driver lost control overcorrected, then traveled off the westbound lane. The vehicle then went airborne and rolled over into a cornfield in the area of 10625 316 west. The vehicle came to rest on its wheels, but the driver was entrapped in the vehicle. Jaws of life from the Harrison Township fire were used to remove the man from the passenger side door.

The driver of the mail truck was the only one in the wreck were transported to Grant medical with serious injuries.

Williamsport Post office responded to the scene to attend to the mail that was in the carrier. Our reporter on scene reported that mail was scattered throughout the area but he believes that all will be accounted for.