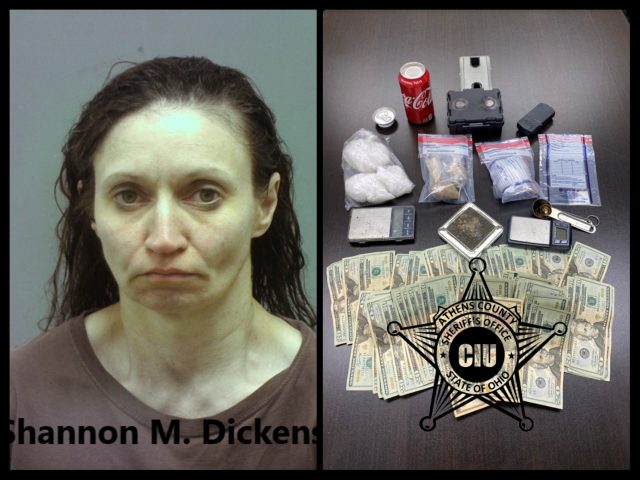 Athens County OH- On April 23, 2021, The Criminal Interdiction Units conducted a traffic stop on State Route 682 near Fourth Street in The Plains, and criminal indicators were present upon making contact with the driver. The driver was identified as Shannon Dickens and showed to have a suspended license and an active warrant for her arrest. Dickens admitted to having a meth “bubble” on her person which was located and seized. Dickens was then detained, and the vehicle was searched incident to the arrest. Deputies located an additional fifteen (15) grams of suspected methamphetamine and a large sum of US Currency. After further investigation was conducted, deputies were able to secure a search warrant for Dicken’s residence at 22 E. Fourth Street in The Plains.

Sheriff Smith states “The search warrant executed at 22 E. Fourth Street yielded additional narcotics including approximately two hundred forty-two (242) grams (8.5ounces) of suspected methamphetamine, which is eighty (80) times the bulk amount, fifty-eight (58) grams (2 ounces) of suspected fentanyl, and fifty (50) grams (1.75 ounces) of suspected heroin, which is twenty-five (25) times the bulk amount. Between the traffic stop and search warrant, over $2,800 cash was seized for forfeiture. It is worthy of being stated that a lethal dose of fentanyl is two (2) milligrams. The seized amount of fentanyl, an extremely deadly drug, could potentially kill approximately 29,000 people. In 2019, the population of the City of Athens was reported as being 24,984. The estimated street value of all seized narcotics in this investigation is $57,400.00.”

Sheriff Smith would also like to note that “The safety of Athens County and its citizens will always be our number one priority. We are dedicated to eradicating illegal narcotics within our county, one investigation at a time, and our efforts ramp with each investigation. I have much admiration for our deputies and their unwavering dedication in making Athens County a safer place for all. A special “thank-you” to Meg Saunders, First Assistant Athens County Prosecutor, for her assistance with this investigation.”