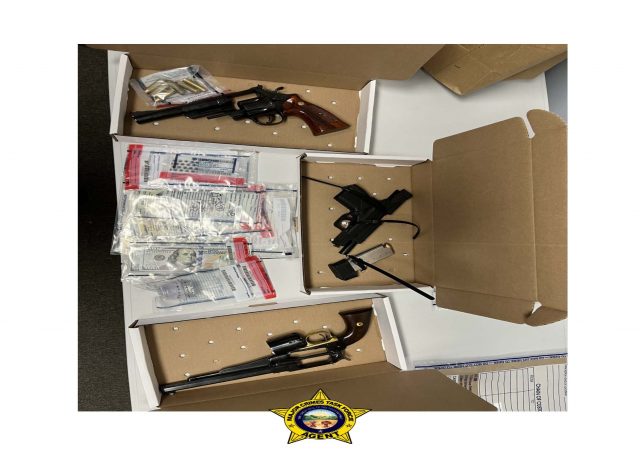 On January 24th, 2023, Detectives with the Southeast Major Crimes Task Force executed a search warrant at a residence on Williams Road, Athens. Detectives were assisted by Deputies of the Athens County Sheriff’s Office and Investigators with the Athens County Prosecutor’s Office. Detectives gained information that the suspect, Charles H. Gall III, was in possession of firearms while under indictment for drug related charges in Athens County Common Pleas Court.

A search warrant was obtained and executed for Gall’s home on Williams Road, Athens, where he and another male were found. Sheriff Smith states “During the search for the firearm, law enforcement located evidence of narcotic possession and trafficking. A second search warrant was obtained and additional items were seized.” During the search, an amount of methamphetamine, fentanyl, money, and guns were confiscated along with evidence of trafficking in both drugs. All applicable items will be sent to the Bureau of Criminal Identification for lab testing.

Arrested on scene and jailed were the following: Charles H. Gall III, age 33, of Athens: • Possession of a Controlled Substance, Fentanyl (F5) • Having Weapons While Under Disability (F3)

Waylon P. Troy, age 30, of Athens: • Possession of a Controlled Substance, Fentanyl (F5) • Having Weapons While Under Disability (F3)

“We encourage anyone with information related to trafficking narcotics to contact our anonymous tip line at 740-566-4304 or submit a tip through the Athens County Sheriff’s Office mobile phone app” advised Sheriff Smith.