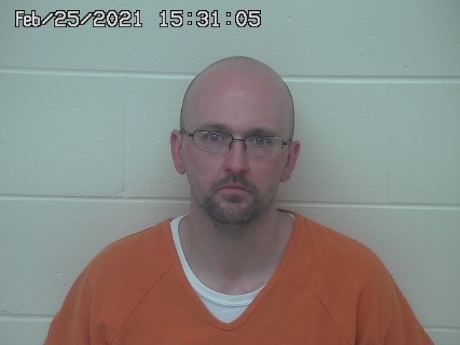 The victim reported, to detectives, that the suspect struck her with his truck and a shopping cart while stealing her purse, resulting in several injuries. The victim was transported to Southern Ohio Medical Center where she was treated and released. The victim reported that her credit card was used at Kroger’s in Wheelersburg, the same date as the robbery.

Sheriff Thoroughman stated that his office requested the original report from the New Boston Police Department, and that his detectives started an investigation.  Detectives were able to identify the suspect from surveillance videos obtained from Walmart and Kroger’s.

On Monday, August 16, 2021, detectives were able to locate the vehicle the suspect used during the robbery, at his last known address in Wheelersburg, Ohio.  During the investigation detectives obtained evidence related to the robbery and learned that the suspect had been arrested in West Virginia, on unrelated charges.  The suspect is being held in the Western Regional Jail.  When arrested in West Virginia, the suspect was wearing the same clothing that he wore the day he committed the robbery at Walmart in New Boston.

Tuesday, August 17, 2021 detectives obtained a warrant for the arrest of suspect, issued through Portsmouth Municipal Court. The warrant has been faxed to the Western Regional Jail and a holder was placed on the suspect.  The suspect is currently awaiting extradition back to Ohio.

Charged was Robert G. Porter, age 34, of Wheelersburg, Ohio. Porter has been charged with one count of aggravated robbery, a felony of the 1st degree. A probation violation warrant has been issued for Porter’s arrest, out of Scioto County Common Pleas Court, and he is being held without bond.

Scioto County Sheriff David Thoroughman stated the arrest was the result of his detectives working quickly, once being notified of the robbery.  The arrest was made possible with the assistance of the loss prevention officers at Walmart and Kroger’s, as well as the assistance of the Western Regional Jail staff. This is still an ongoing investigation that will result in more charges being presented to the Scioto County Grand Jury on a later date. Anyone with information should contact Detective Sergeant Jodi Conkel @ 740-354-7338.