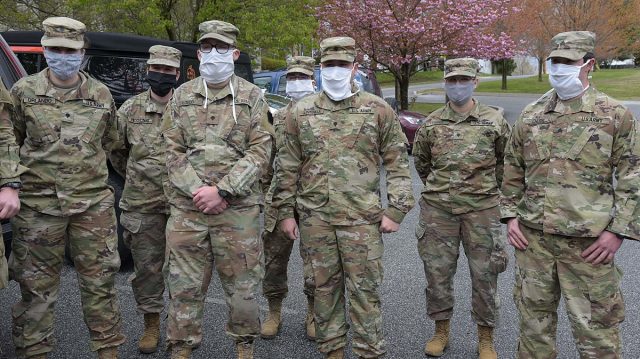 “They tell you to have a bag ready at all times to be ready to respond when the state or nation needs us,” said Major Glosser, who has headed up National Guard efforts over the last month in support of Adena Health System’s COVID-19 testing and operations during the latest Omicron variant-related patient surge. “I think anybody who has been in the Guard for a while, we – and our families – kind of grow accustomed to us being temporarily removed from our everyday life.”

The leadership, physicians and caregivers of Adena Health System are thankful for the sacrifices those Guard members and their families are willing to make. Since early January, about 70 Guard members from as far away as Cincinnati and Cleveland have left their civilian jobs and families to converge on the communities Adena serves to offer support during this critical time. Those tasks, in addition to performing COVID-19 testing, have included spending one-on-one time sitting with hospitalized patients, intra-hospital patient transport, nutrition services (cafeteria support), and performing environmental service (cleaning and housekeeping) tasks at Adena’s four hospitals located in Chillicothe, Greenfield, Washington Court House and Waverly.

The assistance came about through efforts of the Ohio Hospital Association and the governor’s office in support of hospitals across the state that were facing significant patient surges and staffing shortages. With hopes that the Omicron variant’s spread may have peaked locally and with Adena’s staffing resources improving, the National Guard is ending its Adena deployment on Friday.

As a result, drive-thru COVID-19 testing at the PACCAR Medical Education Center on the Adena Regional Medical Center campus will not be available this weekend but will return Monday on a weekdays-only schedule, available from 8 a.m. to 6 p.m.

The drive-thru testing site has succeeded in doing what it set out to do. For patients, it continues to provide a convenient location where they can be swabbed while sitting in their vehicle and quickly be on their way again knowing they will be contacted when the test results are available. For the Health System, it has helped moved the testing load away from Urgent Cares that were regularly seeing record patient levels and allowed them to focus on other care priorities.

To put those patient loads into context, on January 4, 2021, Adena’s Urgent Care facilities across the Health System saw a peak of 305 patients in a single day. On January 5th of this year, the peak was at 570. The drive-thru testing site, meanwhile, peaked at 472 patients on January 13th of this year.

“There were several days when we were seeing more than 1,000 patients a day between the Urgent Cares and the testing site,” said Jessica Matheny, Associate Vice President of Adena Medical Group. “When you look back during a pandemic like this, it feels like we’ve been doing this forever.”

That kind of strain facing the frontline caregivers at Adena and in other health systems inevitably leads to fatigue. The National Guard’s arrival, Major Glosser said, appeared to bring a very visible relief to some of that fatigue.

“The biggest change I noticed from when we arrived on January 7th into that following week was how nice it was to see the hospital employees out here smiling and laughing,” he said. “When my leadership asked me if we were providing value, I said it was obvious from the demeanor of the staff that we were helping them.”

The Health System and community at large, in turn, have shown their appreciation. Several departments have provided Guard members with gift baskets and cards, the Adena Health Foundation has provided them with snacks and drinks, physicians have purchased pizzas for them, Health System leadership has provided them with gift cards to use for meals and a local Girl Scout troop even brought them donuts to enjoy.

“It’s been awesome,” said Major Glosser, who hails from the Cincinnati area. “I’ve had my dinner bought for me several times in the community, and I never expected that. I’ve felt real supported in this community, it’s been a great experience.”

Specialist Noah Love, a 20-year-old Guard Member from Dover who has served the entire month at the testing site, agreed.

“We get treated great around here,” he said. “I was going to transfer closer to home, but I like it too much here to transfer. Some of the patients even want to buy us food and they say, ‘Thank you for your service.’ They’ve been real courteous to us.”

Lt. McKensie Logan, who noted that Guard units since the start of the pandemic have been called upon across Ohio to assist in warehouses, with vaccinations and at food banks among other tasks, added that patients who have been admitted to Adena’s hospitals have also frequently expressed their appreciation to the Guard members.