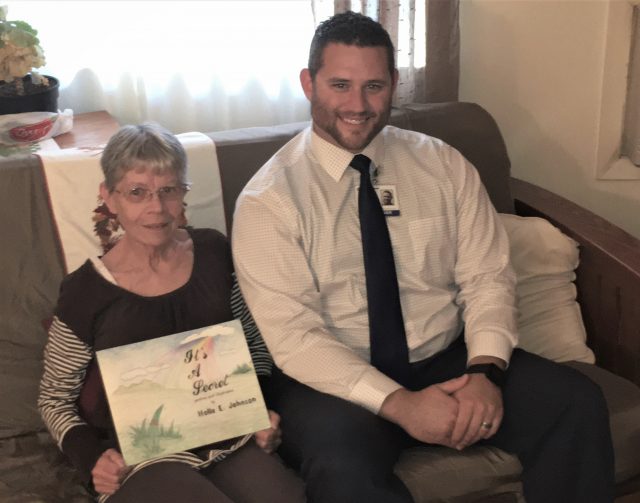 CHILLICOTHE, OH (Dec. 16, 2021) – Adena Hospice Spiritual Coordinator Cameron Caseman proudly keeps a prized copy of a rare book – one of just 40 ever printed – inside his office. Inscribed inside, a very special note to be cherished forever from the book’s author, Holle Johnson.

“My Earthly angel, without the sunshine you brought to me, I would never have gotten my rainbow,” it reads.

The inscription is a fitting one. Holle, a former hospice patient who went to be with the angels over the Thanksgiving holiday period, had waited 28 years to see her children’s book, “It’s a Secret,” published. The story, which she wrote and illustrated herself, contains a heavy dose of angels and rainbows and she said it had been destined to remain tucked away in the dark for her son, Jeff, to find sometime in the future before Cameron came along to help bring it into the light.

Holle said in an interview just a week before her death that in her younger days, she’d had thoughts about writing and illustrating children’s books, but those remained just thoughts and were never acted upon. Never, that is, until the early 1990s when she served as a parent volunteer with the art club of which Jeff was a part.

“We were having some weird conversation and we were talking about the rainbow and there was some sort of dispute over whether or not indigo is really in a rainbow,” she recalled. “He was going into some scientific thing about how the temperatures of all the colors could be measured and it was way above my head. I said, ‘The angels did it’ and I walked away. It just sparked this idea, so I went with it and I wrote this story. Then, I decided since I wrote the story, I might as well do the pictures.”

The creative process took nine months, after which she applied for and was granted a copyright from the Library of Congress for the work. She was asked to visit the classrooms in her son’s school to read her original copy of the book, but her work never went any further than that. While carrying a lot of sentimental meaning for her, she didn’t know how to get it published, she didn’t see it as a perfect work and she was dealing with some issues that pushed trying to publish the book out of mind.

Fast forward to just a couple months ago when Cameron had his first visit with Holle as part of his hospice responsibilities. As the two talked, Cameron happened to mention he’d had his first book published earlier this year, which prompted Holle to mention her unpublished work and pull it out to show him what she’d done. He immediately saw a change come over her, a “sparkle in her eye.”

“What I usually tell people in hospice is you need to find something to live for, something to get up every day for,” he said. “Holle was a walker, she had a coffee club, she did different things and she was very, very active, so that really wasn’t an issue, but I asked her if there was anything she’d really like to do. She kept mentioning the book. She never said she wanted to make sure it’s published, but she just kept bringing it up.”

Cameron saw an opportunity to make Holle’s unspoken dream a reality, his experience and contacts from getting his own book published making the pair’s meeting seem almost destined to happen.

He immediately reached out to some attorneys he knows to explore any potential legal issues involved and, with direct intervention from Holle, convinced her ex-husband to sign his share of the rights to the book written while the couple was still married over to her. The night those issues were resolved, he sent an email to the company that had published his book and shared some of her backstory and a photo of the book’s cover. After seeing more photos and with Holle being a hospice patient, the publisher decided to make the project a top priority and obtained the pages from her.

The pre-publication proof of the book came back three or four days later and, in all the excitement, a crucial mistake initially went unnoticed. That’s when an element of chance stepped in again.

“I left her and was supposed to tell the publisher by 3 o’clock that it was good,” Cameron said. “I forgot to, though, and about 4:30 she called me and let me know that page 1 was missing, so obviously without that, the story doesn’t make a whole lot of sense. Thankfully, I was that bad guy who forgot to call the company to let them know.”

Normally, the situation would have created a second round of proofs being sent out and the accompanying delay. The publisher, who agreed to insert the missing page and double- and triple-check before publishing the final product, worked out an agreement with Cameron on phone approval and got the book published, voluntarily doubling the initial order of 20 copies to provide her with 40 and providing a significant reduction in the cost of production.

None of this was known to Holle until Cameron, working with a social worker and with Jeff, surprised her in the lobby of her apartment building with her books fanned out on a table under balloons and a celebration sign. The gesture, she said, left her speechless.

“For me, it’s like I don’t have the weight of the world on my shoulders any more, if that makes sense,” she said. “It was just something that was forgotten, and now it’s come to light. It was never meant to come to light back then, it just wasn’t meant to be, but patience is a virtue.”

The promise of the book’s publication pushed her to take action on a long-dormant idea for a follow-up to “It’s a Secret,” which she planned to title “It’s a Secret: The Sequel.” At the time of her death, she already had the story completed and about 80 percent of the illustrations done.

Prior to her death, working to get the book published had been something positive Cameron and the hospice staff could grab hold of and follow. Much of the time, hospice work involves helping patients wrap up financial matters or tie up any loose ends and create opportunities for them to say good bye while at the same time providing comfort, counseling and purpose. Turning Holle’s dream into reality and seeing her work ahead on her next project proved inspiring. Getting the book turned around in mere weeks rather than the months such an endeavor would usually take proved satisfying, giving her the chance to actually see and hold the result of her precious work.

For Holle, though, it was just a gift from her “Earthly angel.”

“What touched me more than anything was when Cameron read the book, he said, ‘This is your legacy,’” she said. “Back then, when I did the book, that was my thought, it was just something to leave behind. I didn’t know it would go anyplace, but it would be something that my son, in going through my stuff someday, would come across and say, ‘Wow! I didn’t know Mom did this.’ It was just something to leave behind, and now Cameron’s made that wish come true.”