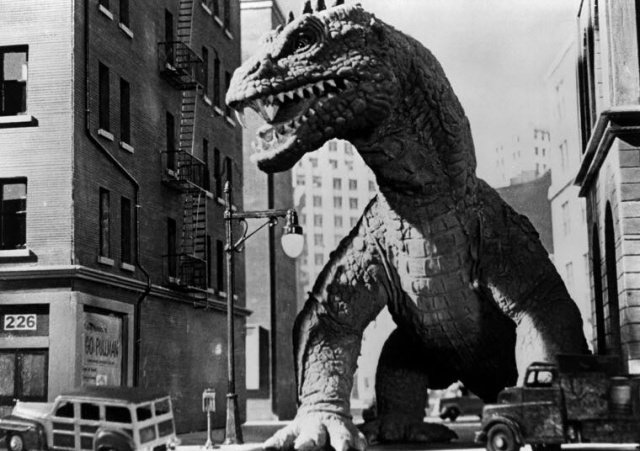 Circleville – Cameron Jones a Circleville native loves classic movies, recently he traveled to Vegas for a vintage movie convention.  I convinced him that he should write a piece about some classic cinema that people would remember and enjoy.
I love classic cinema, particularly films from the 1950’s, and I think its safe to say I have an obsession with 50’s monster films. When I was asked to do this article I quickly came up with a list of nearly 20 films. I needed to narrow that down. Doing a list of just 5 would have been impossible, there’s just no way I could narrow it down that far. A list of 10 would’ve been a bit too long. I went with 7 films that I think represent the very best. So in no particular order here is my list of  the Top 50’s Monster Films,
Beast From 20,000 Fathoms (1953)
Based on a short story by Ray Bradbury entitled ‘The Fog Horn’ ‘Beast From 20,000 Fathoms’ was the genesis of the ‘monster on a rampage’ film cycle. The story goes like this-atomic bomb testing in the article circle sets free a hibernating dinosaur known as Rhedosaurus. The creature makes its way down from the arctic attacking fishing boats and a lighthouse before reeking havoc in Manhattan. It eventually reaches Coney Island in a memorable finale. The attack on the Lighthouse (done with stop-motion effects by Ray Harryhausen) is a standout scene. Its just really fun to watch! In the original Bradbury short story the lone surviving member of a type of Sea Monster rises out of the ocean when it hears what it thinks is a mating call. The monster leaves the Lighthouse in ruins after it discovers the mating call is only a fog horn. It’s actually really sad when you know the history of the scene. The film features a fine performance by monster hunter extraordinaire Kenneth Tobey, and the creature effects by Ray Harryhausen are top notch.