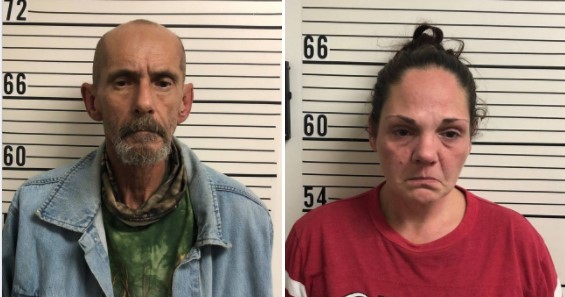 On Friday, November 20, 2020, around 10 pm, the Vinton County Sheriff’s Office received a call of a burglary in progress at a residence on SR324. Deputies arrived and met with the owner, who had blocked the driveway with a vehicle. Deputies could see flashlights shining inside the residence and witnesses an individual come out of a garage. Deputies approached the residence and found a male and female who ran from the back of the residence. After a short chase, both individuals were apprehended.

During a search of the male individual, a firearm was found inside one of his boots. The firearm was traced back to an earlier burglary on SR324. A search of the vehicle found the remaining firearms that were stolen from the same burglary earlier in the day.

Randy T. Barney age 58 of Wilkesville, and Kara D. Ross age 37 of McArthur, were taken to the South Eastern Ohio Regional Jail. Barney was arrested on 3 outstanding warrants out of Vinton County, and charged with Burglary, Resisting Arrest, Possession of Criminal Tools, Possession of a firearm under disability, and Receiving Stolen Property. Ross was charged with Burglary, Resisting Arrest, and Receiving Stolen Property. A bond hearing is scheduled in Vinton County Court for Tuesday.