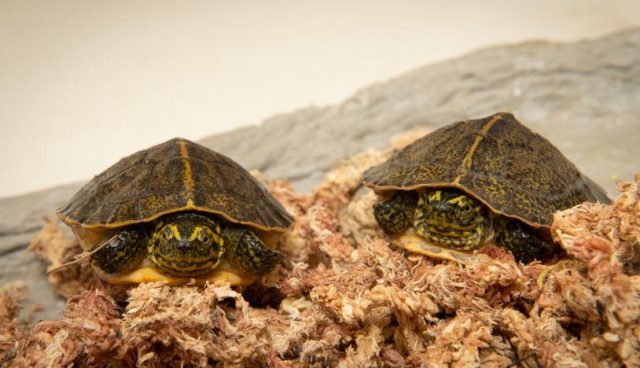 Powell, OH — Two new babies at the Columbus Zoo and Aquarium may be tiny, but they bring big hopes for one of the most endangered species on the planet. On November 1 and 3, reptile keepers at the Zoo’s Shores region successfully hatched these rare yellow-headed temple turtles (Heosemys annandalii), the first ever hatched in an indoor zoological environment. The breakthrough is critical in efforts to boost the numbers of temple turtles, which are facing extinction.

“Turtles and tortoises are some of the most endangered animals on the planet,” said Columbus Zoo and Aquarium President/CEO Tom Stalf. “It’s up to zoos and aquariums to continue learning more about them, and with the expertise and dedication of our Animal Care professionals, we are in a good position to be able to do so with them in our care. This clutch is crucial to the long-term survival of this species.”

All other U.S. hatches of this species occurred more than five years ago at only two other facilities accredited by the Association of Zoos and Aquariums (AZA)—the Houston Zoo and Jacksonville Zoo, where the turtles remain in outdoor ponds all year in the warm weather.

“Our team is extremely proud of hatching these turtles, as well as being able to do so inside the Columbus Zoo’s Reptile House. This is a wonderful achievement as our Animal Care staff has been able to learn more information about this rare and important species, contributing significant knowledge to the zoological community working to help protect these turtles,” said Becky Ellsworth, Curator of the Zoo’s Shores region.

The very active hatchlings are about the size of a racquetball and now weigh approximately 80 grams–the same weight as a small tomato. Adults are large, reaching up to 2 feet in length and weighing approximately 35 pounds. Stark yellow head bands stand out against their dark green skin and brown and black shells.

As the clutch developed, the Animal Care team monitored the female’s eggs using ultrasounds and X-rays. Of five eggs, one turtle hatched on its own, and the care team helped another break out of its shell when it was experiencing some difficulties. Two other eggs did not contain viable hatchlings, and the fifth egg did not hatch. Keepers note that the two surviving hatchlings are doing well and are very healthy. The turtle hatchlings are being cared for in behind-the-scenes habitats as they continue to grow stronger. During the warmer months, guests can view the adults sharing a habitat with the Dalmatian pelicans in the Zoo’s Australia and the Island region, and during the winter, the adults can be seen in the Zoo’s Reptile House.

“These turtles are enigmatic,” said Columbus Zoo keeper Saul Bauer. “We don’t know much about their natural history at all, or what these eggs’ natural incubation time is. This is the first time we’re documenting a lot of this, and we’re learning as we’re going, which is pretty exciting when we know it can have a significant impact on the future of this species.”

At least half of turtle species worldwide are threatened with extinction, and—what was first dubbed in 1997—the Asian Turtle Crisis has revealed the severity of the issue in recent years. In their native countries of Cambodia, Vietnam, Laos, Thailand and Malaysia, temple turtles are literally being eaten to extinction, with collection for pets and traditional medicine, habitat loss and pollution also taking a huge toll.

The aquatic turtles are revered in Southeast Asia’s Buddhist temples, giving them their common name. Monks, whose intent is respect for the animals, illegally take them from their native range and place them into temple ponds. However, the ponds are often overcrowded, and bacterial infections are common.

Three adult temple turtles live at the Columbus Zoo—one male and two females. The hatchlings are the result of a pairing approved by the Association of Zoos and Aquariums’ Species Survival Plan® (SSP), created to help ensure the survival of threatened species.

In 2012, the Convention on International Trade in Endangered Species of Wild Fauna and Flora (CITES) suspended trade of yellow-headed temple turtles. They’re also classified as endangered on the International Union for Conservation of Nature (IUCN) Red List of Threatened Species™.

In 2010, the Columbus Zoo helped fly 85 yellow-headed temple turtles to permanent homes in the U.S. and Europe. The turtles were part of an illegal shipment of more than 1,300 turtles seized en route to food markets in China. The Columbus Zoo provided an emergency grant to the Turtle Survival Alliance (TSA), which placed the turtles in skilled zoological facilities with breeding programs to ensure the species’ survival.

The Columbus Zoo has provided more than $475,000 in the past five years to support turtle and tortoise conservation, granting emergency funding to groups such as the TSA that rescue and rehabilitate confiscated animals, as well as other conservation partners working to monitor turtle populations and raise community awareness about these species.