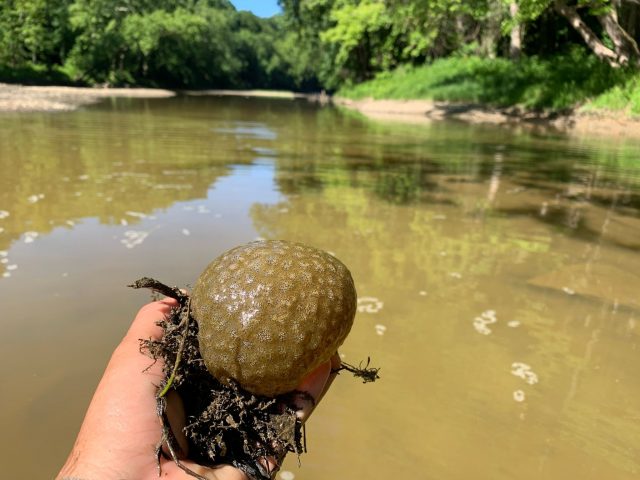 OHIO – This weird and unusual slimy blob you can find floating in Ohio rivers is really a great sign.

The Magnificent Bryozoan,  a jelly-like mass is a species of freshwater bryozoan in the class Phylactolaemata. It is a mass of individual microscopic aquatic invertebrates (called a zooid) live directly on submerged surfaces in a colony. Unlike other Bryozoan, these guys create a gelatinous colony attached to a branch. Most of the time these colonies appear clear brown like and can become free floating in Ohio rivers.

Each zooid has a horseshoe-shaped head-like structure that has a crown of 50-84 tentacles that filter food from the water. That’s what makes them amazing. These tiny colonial organisms serve a very important ecological role in aquatic ecosystems. It is said that a large colony can filter thousands, even tens of thousands, of gallons of water per day. Cleaning Ohio’s water.

On average, colonies are between 30-50 cm in diameter. These can be found on the East side of the US From Maine to Indiana, in the Great lakes, and in the waters of Florida.