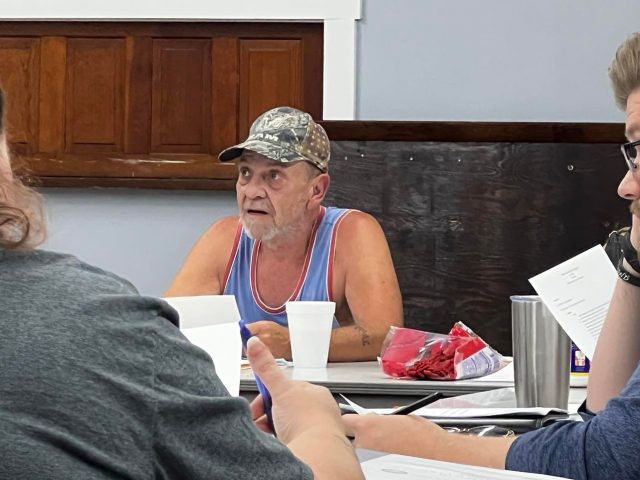 WILLIAMSPORT – During last night’s Williamsport Council meeting several people came to the meeting to speak in opposition to the Chipmunk Solar project that has been proposed for property in the area.

Chris Weaver who lives across the street from part of the Solar Farm project came to the public meeting to ask the mayor of Williamsport to resign.

“I oppose this and I’m here to ask you to resign,” said Weaver, “Your letter to support the Solar Farms when a majority of the citizens of Williamsport oppose it makes you a disgrace to your position. Time to hang it up buddy.”

In November of 2021 John Elliot Mayor of Williampost sent a letter to Pickaway County Commissioners in favor of the project:

“Dear Pickaway County Commissioners, As the Mayor of the Village of Williamsport, I am writing to share my support for the Chipmunk Solar project being developed by Geenex Solar and EDF Renewables. The folks from both Geenex and EDF Renewables have met with me and my staff multiple times to share information, answer our questions on solar, and talk about the benefits that the Chipmunk Solar project will bring to our community. They continue to ask how they can collaborate with us and have already demonstrated their support of our community with the upcoming Village’s Tree Lighting Ceremony. A project like Chipmunk Solar means many things for Pickaway County, including Solar facilities that will increase revenues for our community. Property taxes paid by solar farms generate significant revenue for the county and communities they are built in, helping fund schools, services, and other public works all without the need for county services in return. They can also attract new economic development to the area. Solar provides an opportunity for our local farmers and their families to diversify their income and save their land for future generations. It also creates new income opportunities for local businesses, including those in construction, hotels, and restaurants like Pettit’s which will benefit from several years of increased business thanks to the nearby construction. Solar can be a win for the residents of Pickaway County on the benefits of Chipmunk Solar and its importance to our community’s future. Sincerely, John Elliott, Mayor.”

Locals in town including Chris Weaver who lives across from part of the possible site say that the solar farm would change the way of life for him and his family that has lived in the area for over 30 years.

“We would live across the street from constant construction for years that would be very loud, they drive poles into the ground over twelve feet hundreds of them and I’ve witnessed how they do it at Yellow Bud and that would be difficult to live with. We are also concerned with the fact that they have limited studies on how this affects nature and things like our rural satellite internet connections.”

Weaver says he’s spoken to many officials and brought his concerns to Council, the mayor, and even Pickaway Commissioners.

“I’m not someone who usually tells others what to do on their own property, but when it affects the population around the property and my right to live peacefully then I have to say something.”

In May the Williamsport Council passed a resolution in defiance of the Mayor’s letter to the Commissioners.

During last night’s session, Assistant County Prosecutor at Pickaway County Prosecutor’s Office Jayme Fountain was at the meeting to help move items along during a volatile situation between admin and Council. She told the public that spoke out about the project that the council has already filed their opposition of the project and the mayor has already filed his letter now it is up to the Ohio Power Siting Board to determine the next steps.

Currently, on the Ohio Power Siting Board, the Chipmunk project is pending, the proposed project is an up to 400 megawatt solar-powered electric generating facility located in Deer Creek, Jackson, and Monroe townships and the village of Williamsport in Pickaway County. The location of the proposed Chipmunk Solar Project is being evaluated within approximately 3,684 acres.