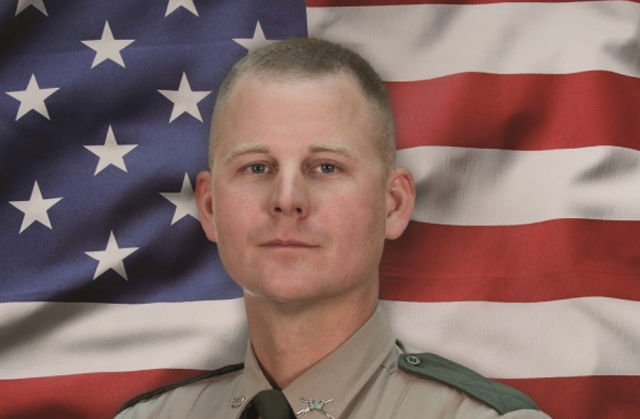 LOGAN – A Wildlife officer in Logan county went above and beyond to save a young teenage girl who had a car accident and needed aid.

On November 26, State Wildlife Officer Adam Smith, assigned to Logan County, overheard the county dispatch report an injury accident on a road not far from his location. A deputy sheriff was on the way, but Officer Smith knew he was closer and responded immediately. As the first person on the scene, he rendered first aid to the injured teenage driver, who was suffering a partially amputated arm with severe bleeding. Using his first aid equipment, he applied a tourniquet to her arm, wrapped it with gauze, and stopped the bleeding. He reassured the driver of the car that she was going to be OK. Emergency medical staff arrived, and Smith helped extract her from the car for transport to the hospital. When she arrived at the hospital, she underwent emergency surgery and is now recovering. Other agencies that responded to the scene along with hospital staff credited the swift action of Officer Smith with saving the person’s life.

Mikes is still recovering from her injuries but according to a press release from Logan Sheriff she’s lucky to be alive.

All Ohio wildlife officers are trained in first aid and CPR and are provided first aid equipment and trauma emergency supplies. They undergo regular training using these tools in situations where they may have to assist the public or render emergency aid to themselves if injured while working alone. Wildlife Officer Adam Smith acted decisively and courageously, using his special training and equipment to save the life of the teenage driver. Thank you to Officer Smith for his life-saving work, and to all of our wildlife officers who boldly step up when they encounter unexpected situations!