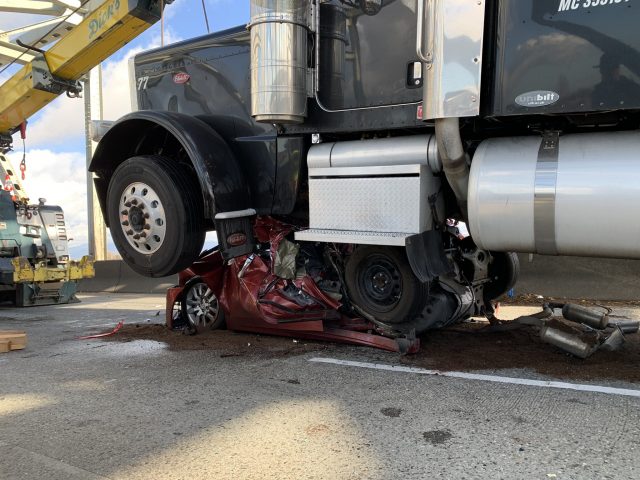 SEATTLE – A woman has survived something that no one would have expected that anyone would after a semi crushed her vehicle in a crash.

According to Trooper Rocky Oliphant from the Washington State Patrol, the 2015  Nissan Altima was traveling with the semi behind her when the semi did not come to a stop and hit and climbed onto the small car folding it in half and crushing it.

The 46-year-old woman inside only came out with minor injuries.

“There’s really not a word to describe this collision. Miraculously believed to be minor injuries. The car was struck from behind, folded the car in half, and semi came to rest on top of the car. In my 14 year career, I have never seen anything like it, said Trooper ROcky Oliphant in a tweet.

Rear semi-truck driver was cited for following too close, questions were raised on how the woman escaped the crash and the trooper explained that when the tow truck driver lifted the front of the semi off the car she was able to climb out on her own power.