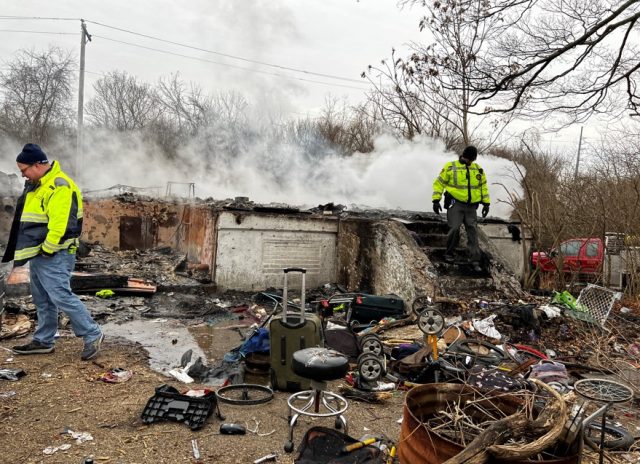 Around 10:45 am on Sunday 1/16/22 a 911 call came into Pickaway dispatch of smoke and fire in a wooded area just west of Circleville. When deputies arrived on the scene they found an old building that was used as a water treatment plant years ago and abandoned fully engulfed.

Fire crews battled access to the location due to shopping cars and debris in the accessway underneath the railroad tracks just beside US-23. Pickaway Township fire department told Sciotopost that they ended up cutting a fence on some private farmland adjacent to the location to gain access with a truck. When the fire department got close to the scene they still have to roll out dozens of rolls of hose to access the remote location.

According to Law enforcement on the scene the structure was used as a water treatment plant, then it was used as a place for livestock, but recently it was a homeless encampment.

During the fire, a crash occurred on US-23 where firefighters were gaining access to the location that stopped traffic on the southbound side for about 30 minutes.

It took fire crews around two hours to put out the fire, and the structure was a total loss. The fire will be under investigation. Pickaway Township, Scioto township, Southwest, Harrison, Circleville, Tarlton, and Clearcreek fire helped at the scene.