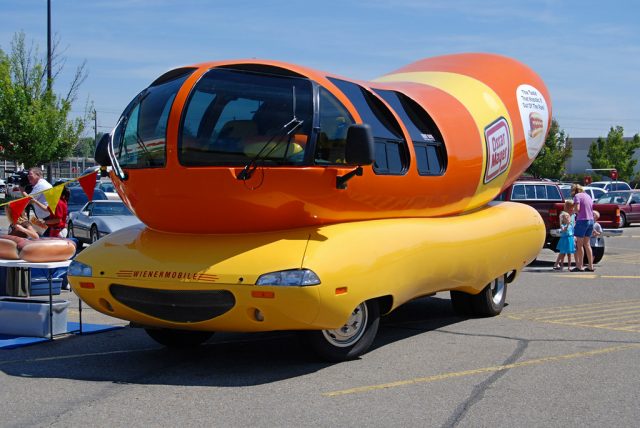 CIRCLEVILLE – The Oscar Mayer Weiner mobile stopped in Circleville on 12/8/22 we took a closer look to find out what’s under the hood.

According to the hot doggers, the people who drive the wiener mobile around the country the vehicle has made many changes over the years and started this traveling journey with a hot dog vehicle in 1936!

The first wiener mobile was created in Chicago Illinois for the company and that stayed the same until the war when it was scrapped for the war efforts. In 1952 a new mobile Weiner appeared developed out of Wooster Ohio from a Dodge chassis. Over the years the mobile has been several different makes and models, Dodge, Willys, Chevrolet, Ford, GMC, Ram 1500 series, even a Mini cooper in 2008.

Today’s build is on a GMC W-series chassis with Pontiac Firebird Taillights. It’s powered by a Vortex V8 engine it has seating for six inside, even has a moon roof.

Hotdoggers work for only one year and are made up of only twelve specific people who are selected from college campuses that specialize in journalism. in 2018, 7,000 people applied for the job.

This particular mobile is the east coast mobile and the hot doggers told Sciotopost that they have been all up and down the East Coast from Maine to South Carolina and the reason they are in Ohio is that they are heading back to the central station of Wisconsin where they will swap out Hotdoggers and head to different parts of the country.

Every wiener mobile has its own vanity plate in January 26, 2020, a Wienermobile was pulled over by a Waukesha WI sheriff’s deputy for violating the Move Over Law, which requires motorists to pull over one lane to pass an emergency vehicle with its warning lights on. That story below