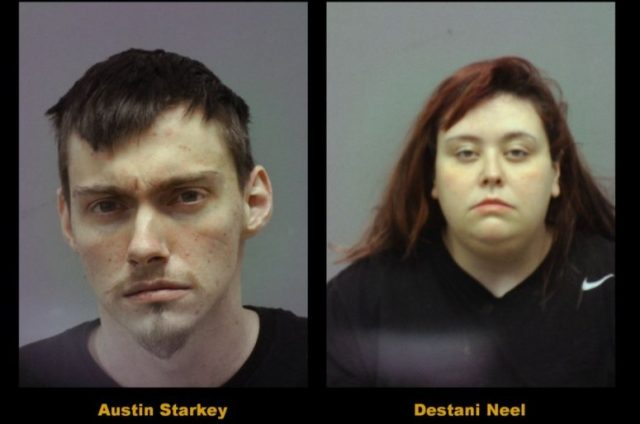 Hocking County Prosecuting Attorney Ryan R. Black and Hocking County Sheriff Lanny E. North announce the indictment of two individuals in the connection with the murder of Arianna D. Starkey, a two-year-old female, which occurred in January. The indictment contains the specification for a victim under the age of thirteen, which does include the possibility of the Death Penalty.

On Friday, February 26, the Hocking County Grand Jury returned an indictment against Austin L. Starkey, 25 of Logan, and Destiny D. Neel, 27 of Logan. Starkey is the father of the deceased, and Neel is the live-in girlfriend of Starkey.

The indictments stem from a Sheriff’s Office investigation which began on Friday, January 8, when a 9-1-1 call was placed by Neel stating that the two year old was not breathing. Through the course of the investigation, Detectives and Prosecutors were able to determine that couple’s original story of how the child’s injuries occurred was not factual. They learned the initial story given was fabricated in an attempt to hide that the injuries were actually the result of an assault.

The Grand Jury returned an indictment on Austin L. Starkey for:

•Felonious Assault, a Felony of the Second Degree

•Permitting Child Abuse, a Felony of the First Degree

•Murder, an Unclassified Felony•Endangering Children, a Felony of the Second Degree

•Tampering with Evidence, a Felony of the Third Degree

•Endangering Children, a Felony of the Third Degree

The Grand Jury returned an indictment on Destiny D. Neel for:

•Aggravated Murder, an Unclassified Felony, with Specification that the victim was under 13 years of age, which can carry the Death Penalty.

•Felonious Assault, a Felony of the Second Degree

•Endangering Children, a Felony of the Second Degree

•Endangering Children, a Felony of the Third Degree

Prosecuting Attorney Black stated: “These are tragic circumstances. Nothing is more unconscionable than the murder of a child, made especially horrific by it being perpetrated by the victim’s caregivers. The brutality involved makes this case particularly difficult to stomach. It also demonstrates just how necessary it is to be absolutely tireless in our pursuit of justice for Arianna. I am confident that the determined work of the Hocking County Sheriff’s Office’s detectives and investigators has built a strong case and that it will lead to an equally strong result. We have every intention of using every resource available in that pursuit.”

Sheriff North stated: “Cases involving the murder of innocent children, especially when they are so young, are among the most heinous cases that law enforcement officers are ever tasked with investigating. I would like to thank Prosecutor Black and his assistant prosecutors and the detectives who spent countless hours on this case to make sure it was investigated thoroughly so justice could be sought on behalf of Arianna.”