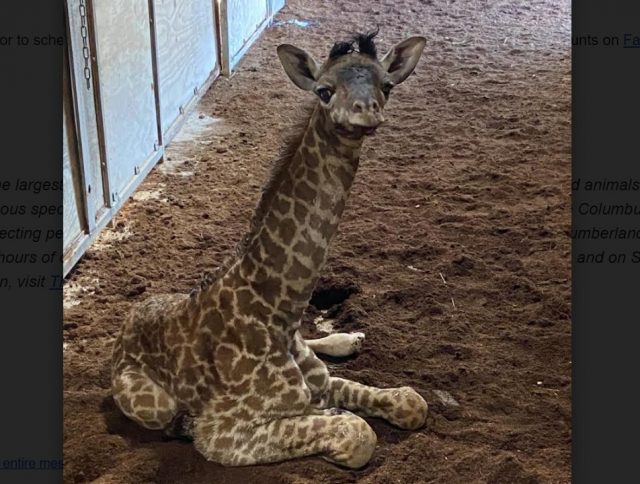 Cumberland, OH— The Wilds is celebrating the birth of an endangered male Masai giraffe calf, born just outside the giraffe barn during the afternoon of September 8, 2021. This birth marks the 20th giraffe calf to be born at the conservation center throughout its history.

Animal Management staff continues to monitor the calf and notes that the calf appears to be strong, tall even for a newborn giraffe at over 6 feet, and is staying close to his mother, Savannah. As temperatures begin to cool off at night, she and her calf have access to the giraffe barn should they choose to seek additional shelter and warmth.

The calf’s father, Raha, was born at the Los Angeles Zoo in April 2006 and arrived at The Wilds from the Pittsburgh Zoo & PPG Aquarium in 2009, where he has since sired nine calves. Savannah was born at Cleveland Metroparks Zoo in August 2003 and has lived at The Wilds since 2004. Savannah is an experienced mother, and this calf is her sixth.

The breeding of Raha and Savannah was based on a recommendation from the Association of Zoos and Aquariums’ (AZA) Species Survival Plan® (SSP), a program designed to increase the genetic health and diversity of threatened and endangered species in human care.

The birth is a significant achievement for Masai giraffes. In 2019, the International Union for Conservation of Nature (IUCN) listed the Masai giraffe subspecies as endangered as the population has plummeted by nearly 50 percent over the last three decades. There are estimated to be only 35,000 Masai giraffes remaining in their native ranges in southern Kenya and north and central Tanzania primarily due to habitat loss, civil unrest/military operations, poaching and ecological changes.

To further protect the future of giraffes, The Wilds and the Columbus Zoo and Aquarium, which manages The Wilds, have provided more than $265,200 over the last five years to support conservation projects benefiting giraffes in their native ranges. These funds support several conservation projects in giraffe range countries across Africa, including a giraffe-specific initiative through the Hirola Conservation Programme in Kenya, Wild Nature Institute’s Serengeti Giraffe Conservation Research project based in the Serengeti National Park in Tanzania, the Giraffe Research and Conservation Trust in Kenya, and the Giraffe Conservation Foundation (GCF) in Namibia and Uganda. This summer, the GCF announced an important conservation milestone as government officials in Rwanda signed the National Giraffe Conservation Strategy and Action Plan, which was a collaborative effort between GCF, the Veterinary and Monitoring and Research Units of the Uganda Wildlife Authority (UWA), with input from local and international experts and organizations. The Columbus Zoo is one of the organizations recognized for its financial support of this plan, which highlights the policies, gaps, and opportunities for giraffe conservation in Uganda. The plan is also intended to attract widespread support from local, regional, and international stakeholders and other partners to promote the long-term conservation and management of giraffes.

“The arrival of this calf is exciting on many levels. Of course, it is always heartwarming to welcome an adorable calf to the herd, but it’s the hope that his birth represents for the future of his subspecies that carries the deepest meaning. We are proud to play an active role in efforts to help protect giraffes and to continue working to inspire our guests to join us in taking action to help ensure that these amazing animals are around for generations to come,” said Dr. Jan Ramer, Senior Vice President of Animal Care and Conservation at the Columbus Zoo and Aquarium, and Vice President of The Wilds.

Calves are born after a gestation period of approximately 15 months. The mother gives birth standing up, and calves can stand and run on their own within a few hours of birth.

The new calf may be visible to guests during either an Open-Air Safari Tour, presented by G&J Pepsi, or a Wildside Tour, presented by AEP Ohio. The Wilds is currently open daily through September and then weekends only in October.