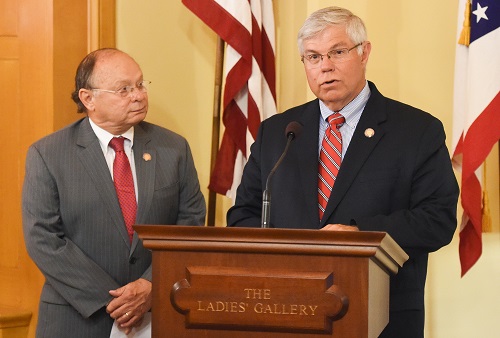 The legislature generally approves a capital budget every two years, and the bill funds needed improvements to public services and facilities across the state, including schools, roads and bridges, and mental health and addiction facilities. The budget was introduced Tuesday as an amendment to Senate Bill 310.

“I am excited to announce state funding for these community projects in our area,” said Scherer. “These projects have strong local support and will have a positive impact on our community.”

Scherer currently is finishing his last month of his four term limits as State Representative and will continue representing people in Pickaway county as a county Commissioner filling Brian Stewarts position.

Over $171 million will be used for economic development and cultural projects of local and regional importance to boost growth and increase opportunities throughout the state. Below is a summary of key community project funding in Pickaway County:

Investing in Our Schools

·         $305 million will be invested in local school construction, including repairs, renovations and maintenance for primary and secondary facilities. This is in addition to the $300 million already approved this year by the General Assembly in Senate Bill 4.

·         $452 million will be invested in projects supporting Ohio’s 37 public colleges and universities.

Investing in Our Infrastructure

·         A substantial portion of capital spending goes to local roads, bridges, water-supply systems, storm sewers and wastewater systems, and $280 million will be directed to local infrastructure projects through the Public Works Commission. This is in addition to the $255 million for the Public Works Commission already approved by the General Assembly in Senate Bill 4.

·         $253 million for the maintenance and preservation of Ohio’s dams, parks, trails, waterways and wildlife.

·         $18 million to improve the security and efficiency of public agency websites and the MARCS first responder communications system.

Investing in Our Communities

In addition to the local community projects listed above:

·         $95.6 million will be invested in critical health and human services funding for mental health and addiction treatment facilities in communities across the state.

·         Both the Ohio Senate and Ohio House of Representatives approved the measure on Thursday. The capital budget will now go to the Governor for consideration and to be signed.

Scherer voted in support of Senate Bill 310 during today’s session. The bill passed with a vote of 77-7 and now heads to the governor’s desk for his signature.