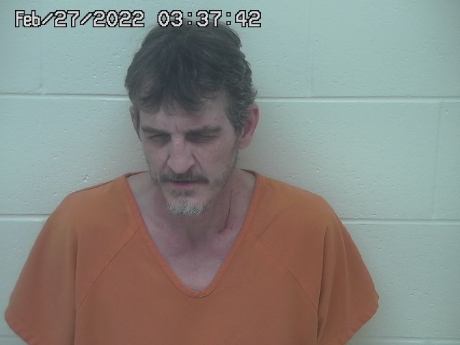 Scioto County Sheriff David Thoroughman stated that his 9-1-1 communication center received a 9-1-1 call on February 27, 2022 at 12:09 am stating that someone had been shot and they needed an ambulance. The incident occurred at 410 Straight Fork Road West Portsmouth, Ohio.
Sheriff Thoroughman stated that deputies, detectives and emergency medical crews responded to this location. Deputies located one victim with a gunshot wound upon their arrival.

The shooting victim has been identified as Rodney A. Queen, age 57, of 410 Straight Fork Road West Portsmouth, Ohio. Queen was flown to Saint Mary’s Medical Center in Huntington, W.Va., where he is listed in critical condition.
Sheriff Thoroughman stated as a result of this investigation one male has been charged. Since this is an ongoing investigation more charges may be presented to the Scioto County Grand Jury on a later date.

Arrested was Terry A. Jewell, age 53, of 410 Straight Fork Road West Portsmouth, Ohio. Jewell has been charged with one count of Felonious Assault, a felony of the 2 nd degree, and one count of Weapons Under Disability, a felony of the 3 rd degree. Jewell is currently being held in the
Scioto County jail on a $100,000.00 bond.