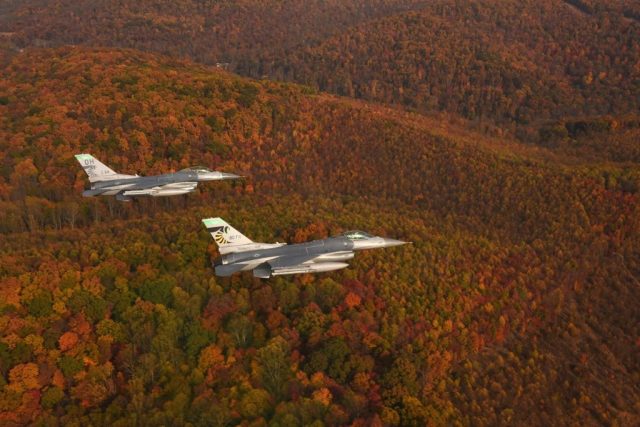 ROSS – Ross county sheriffs office is reporting that you should hear some BOOMS over Ross County today and that everything is ok.

The Air force according to Ross County sheriffs department is flying overhead today in the area and you should hear,
explosions.” These are nothing out of the ordinary from these fighter jets.

Recently people from Pike, Jackson, Ross and Scioto County have reported a dramatic increase in sonic booms so I reached out to 180th Fighter Wing in Swanton Air Base / Toledo OH and was told that they have had more training in the area because of a return from deployment in Afghanistan. The area called Buckeye Air Space is where 180th Fighter Wing jets train for missions. That area happens to be over the forest areas of Southern Ohio areas mentioned above.

“Training is based on current threat assessments based on intelligence and orders from government officials,” said 180th fighter wing, “Training is done Monday through Thursday two flights a day, and one weekend a month National guard flies. Usually flights have between two and four jets.”

Before this change most Southern Ohio residents heard only the National guard on weekends, but with the return of the wing those flights and booms will be more until they are deployed again.

According to a online post from the wing both the Alpena air-space complex in Michigan and the Buckeye/Brushcreek airspace in Southern Ohio, provide locations for supersonic, chaff/flare and electronic attack training with full radar ground control intercept (GCI) and Link-16 datalink capability.

In addition, the wing utilizes three aerial gunnery ranges approved for the employment of both precision-guided and ballistic munitions, allowing the 180FW to remain proficient in advanced targeting pod tactics in the accomplishment of its air interdiction, close air support and air defense missions.