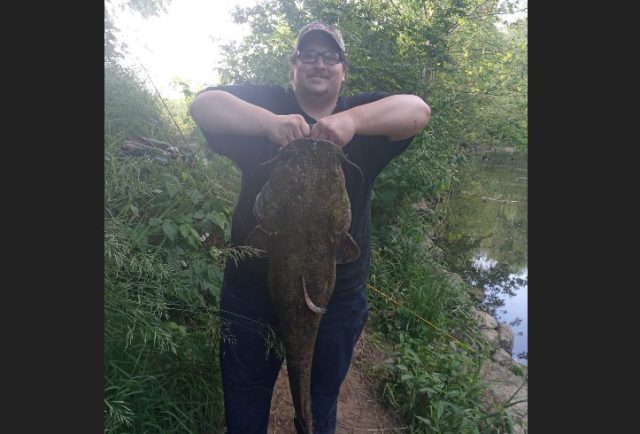 ROSS – A Ross County man says that he hooked onto fish of a lifetime and the biggest fish he has ever caught on the holiday weekend when he reeled in a nearly 50 pound Flat Head.

Tony Messer said that he was fishing a special spot just south of Deer Creek on 104 when he hooked onto something he felt was a snag.

“I was using a 3.5-inch keitech swimbait, bluegill flash in color,” said Messer, “I was targeting smallmouth, crappie, and white bass when I felt it.”

He was also using a 2lb test line so once he realized he had hooked a whopper of a fish he went into fight mode.

“When it started taking line, I knew I wasn’t snagged, I just loosened my drag and let it do what it wanted to do.”

What happened next was a 45 five minute fight with the huge flathead catfish before Messer could land the trophy fish.

“It was like a bond between that fish and myself that I will never forget. I wore her out, she wore me out. She was as old as my father and deserved to live another day.”

After snapping a few pics of the 40ish pound flathead catfish he released her back into the water.

“My brother Garret and my Dad Wayne said that I should keep the fish get it mounted, but I threw her back because hopefully, she’ll outlive me and someone else will catch her again when she is a hundred pounds or more. I’m all for keeping and eating regulation-sized fish, but when you have a bond like that you can’t really explain it.”

Messer said that he didn’t weigh the giant exactly but he said he works in a restaurant where he lifts 50-pound bags of flour every day and she felt about the same. They did get a length measurement of 42 inches.

Flathead catfish can grow to be around 60 inches and weigh up to 123 pounds. Flatheads are the second-largest catfish in North America after the Blue catfish. Both species of catfish can be found in Ohio rivers and lakes. Most generally catfish prefer high current waters.