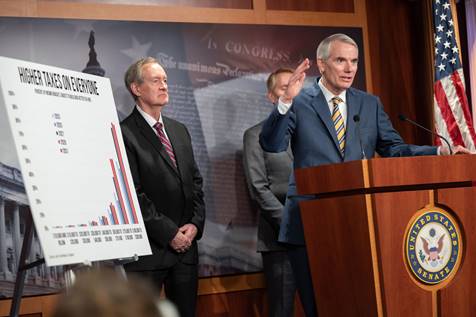 At a press conference earlier today, U.S. Senator Rob Portman (R-OH) joined his fellow Senate Republicans in discussing the latest inflation numbers released this morning. The U.S. Bureau of Labor Statistics’ report showed that the consumer price index rose at a 9.1 percent annual rate last month, the highest level of inflation since November 1981. Once again, Senator Portman pointed out that the only way to combat this inflation is to deal with the supply side of the economy, including more domestic energy production which Democrats have been unwilling to consider.

At the same time, Democrats propose increasing taxes on small businesses and working families, something that Senator Portman argues will hurt lower and middle-income Americans the most, especially as they deal with soaring inflation and rising costs. Portman especially criticized the proposed tax hike on small businesses, 99 percent of which structure themselves as pass-throughs, meaning the tax hike will inevitably get passed down to workers and consumers in the form of lower wages and high prices. Instead, Senator Portman said, we must return to the pro-growth economic policies that were in place before the pandemic that grew the economy.

“Thank you. I appreciate Senator Crapo for having this meeting today.

“Look, this is the most punitive tax of all. We just got the numbers this morning from Ohio. $8,300 a year in additional spending on energy, on food, utility bills generally, on clothing. $8,300 a year, that’s based on our numbers we have in Ohio, January until now, in terms of inflation and extrapolating that out for the rest of the year. That’s impossible for people to handle if they are on a fixed income. A lot of lower and middle-income folks in Ohio are suffering the worst, some of whom have long commutes. I’m hearing from them. I was home over the break to talk about other issues but pretty much everybody got around to inflation, no matter what the other topic was that we talked about. And this is something that, unfortunately, is going to get worse, not better, unless we change policies.

“So we have the worst inflation in 40 years. We’ve got this 1.3 percent last month, by the way, when you extrapolate that over the next year, that’s 16.8 percent. That’s just unimaginable. Even higher than the Carter years. So what do we do? I think Senator Cornyn said it well – we’ve got to deal with the supply side. Demand reduction is not where we want to go, with higher and higher interest rates. Some of that is necessary at this point, I suppose. But what we want to do is help on the supply side of the economy, including producing more fossil fuels here in this country, and all forms of energy, in order for us to see the price go down at the pump and the utility bills go down. We want to see regulatory relief, and certainly not tax hikes, but rather more pro-growth policies, as we had before the pandemic. Remember during that time period we had low inflation and we had a strong and growing economy. We had three percent wage growth every month, at least, for the 19 months prior to the pandemic. Now we see just the opposite. Wages are growing but not nearly as fast as inflation.

“So everybody is feeling like they’re losing ground. And what the Democrats’ answer is instead of helping on the supply side, doing things that are counter-inflationary, they are proposing things that are going to make it worse. This chart is an example of that. By the way, it does hit people well under $400,000 a year, but the bigger point is that it’s pro-inflation. Because when you tell a pass-through company, which 99 percent of the small businesses in Ohio and around the country, you going to have to pay more in taxes – where does it come from? Well, a lot of that gets passed along to the consumer. Some of it comes out of workers’ wages. But all of that is going to add to inflation, so this is exactly the wrong way to go. I’m a pass-through owner, a lot of my colleagues are. I grew up in a pass-through company. We used to get a dividend for one reason only, and that’s to pay taxes. The rest got reinvested in the company. And yet it all showed up on the individual income tax form because it passes through to you.

“So I think maybe a lot of Democrats don’t realize that’s how these companies work and when you are saying you are going to put taxes on the person who has that income reflected in their individual income tax rate, they take that often out of the company and/or, again, pass this along to the consumers and to the employees. So, my hope is that the Democrats will see that this is the wrong way to go. Don’t add more stimulus spending, that’s one thing they are talking about. Don’t tax America’s small businesses, that’s pro-inflationary. Instead, do what we did before the pandemic that was working for everybody, particularly for lower and middle income workers. They were the ones who benefitted the most from that growing economy and rising wages. If we do that, we’ll begin to get out from under this unbelievable inflation that we’re now facing and begin to get the country back on track.”