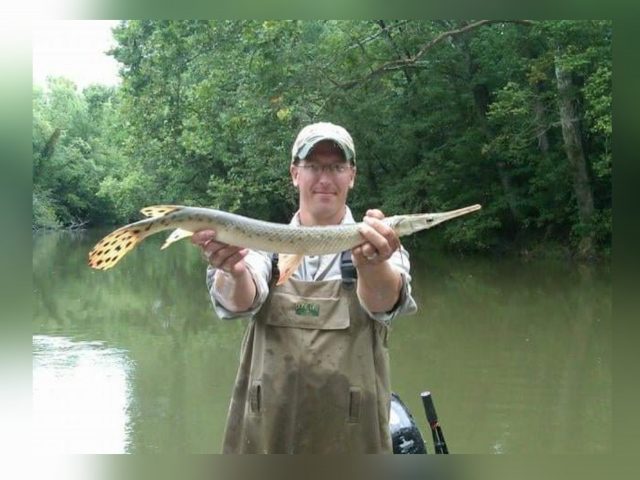 Deer Creek Lake, U.S Army Corps of Engineers- A fish that looks as prehistoric as it is, the Shortnose Gar is a species with some interesting mechanisms. You’ll notice that Shortnose Gar have long snouts with an impressive set of needle-like teeth arranged in a single row. These teeth act like a cage, designed to lock prey in rather than shred them. Once the prey gives up the fight, the shortnose gar will tilt its head back to finish devouring its meal. If you get the chance to see a shortnose gar, you may just spot it along quiet backwaters, opening its jaws at the surface to take in oxygen with a loud SNAP! before dipping back below the surface.

The gar’s genus Lepisosteus dates back over 100 million years ago, reaching the time when dinosaurs roamed the earth. Also in the same family is the longnose gar—whose incredibly narrow snout can extend roughly three times the length of its head—and the alligator gar, which has some features resembling its namesake and has been caught weighing over 300 lbs!

These sportfish are endangered in Ohio and sensitive to pollution and other water conditions. While they can be considered more of a nuisance species, Shortnose Gar are important to maintaining balance within the ecosystem by feeding on fish and macroinvertebrates that can damage game fish populations. Their presence in Deer Creek is an indicator of high water quality and habitat.