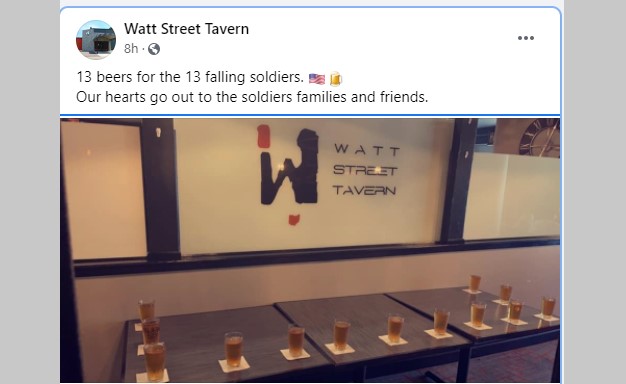 CIRCLEVILLE – A Circleville Resturant is paying tribute to the 13 US service members who were killed during a terror attack while trying to evacuate American and Afghan Alllies.

Local Pickaway county restaurants posted their support of the 13 soldiers today, by pouring the 13 fallen a cold one.

Our hearts go out to the soldier’s families and friends,” it says on Watt Street Taverns Facebook Post.

Tavern 62 in Orient Ohio also stacked up a few cold ones for the 13, “this is for the 13 soldiers not coming home,” they posted on Facebook.

An ISIS-linked bombing at the Kabul airport on Thursday killed 11 U.S. Marines, one soldier and a Navy medic, according to defense officials, as well as dozens of Afghan civilians