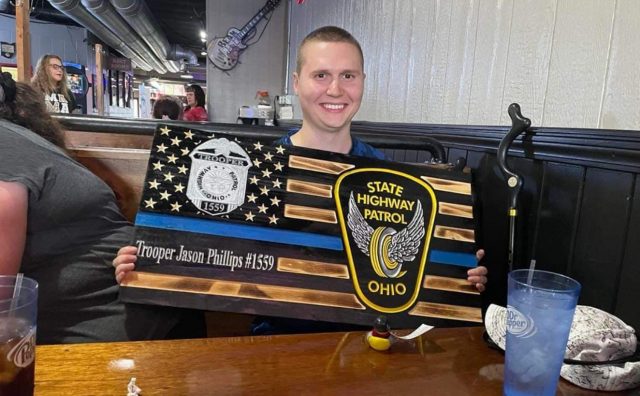 PICKAWAY – In 2019  Ohio State Trooper Jason Phillps was severely injured in a wrong way crash, since then Phillps has been on a long road to recovery.

In June of 2019 at approximately 2:40 a.m., a trooper was dispatched to locate a possible impaired driver reported to be in the area of milepost 155 on Interstate 71. The trooper was struck head-on by another vehicle traveling south in the northbound lanes. As a result of the crash, both vehicles caught fire.

A Good Samaritan stopped to provide assistance after the crash and was also injured. The driver of the wrong-way vehicle was transported to a hospital in Mansfield. The trooper and Good Samaritan were flown to hospitals in Columbus.

On Wednesday, June 1st, Kyle and the Bros presented Trooper Jason Phillps with a plaque custom made to show his badge number and represent the “line blue line” on the back it states, “Presented to Ohio Highway patrol trooper Jason Phillips for Valor, boldness or determination in facing great danger especially in battle, heroic courage, bravery, June 27, 2019”

The bros presented the plaque to Phillips at Gibbie’s restaurant in Downtown Circleville and treated him to lunch.