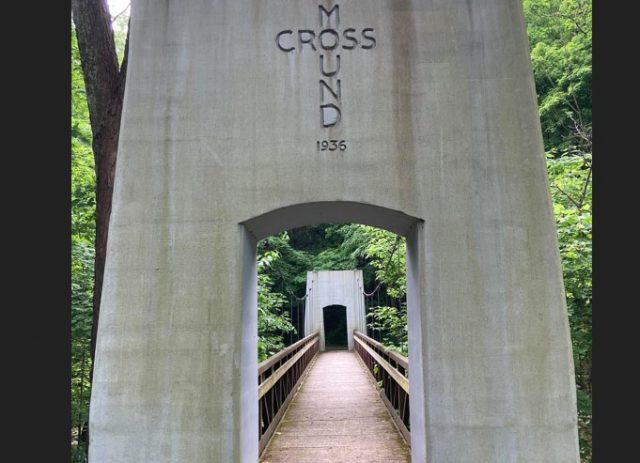 FAIRFIELD – A park just outside of Pickaway county in Tarlton Ohio has some mystery on how it was built, and may be a great park to explore this fall.

The location 11615 16th Road SW is owned by the Fairfield county park district which has owned the park since 1944. The park has two unique features a WPA pedestrian bridge and a cross mound.

The bridge was built in 1936, the suspension-type bridge sits over Salt Creek and has amazing views in the fall, but the mystery surrounds how the ancient earthwork of the cross mound was created.

The mound is in the shape of a plus sign, or cross, it has four identical arms each about 12′ wide, 3′ high, and 45′ long.  In the middle of the cross is a circular-shaped depression that is 20′ in diameter and about 12″ deep.  That depression may have been deeper at one time but has filled in over time.  The orientation of the arms nearly aligns with the cardinal points of north, south, east, and west.  There are small stone mounds near the cross.

Archaeologists have suggested its western arm was carved out of the surrounding landscape as opposed to the traditional approach of mounding soil to create a structure.

No one knows what it was really used for, other than they can tell it is man-made and quite large.

This is a great location to go check out this time of year with the leaves beginning to change, along with this interesting history it can be quite spooky.