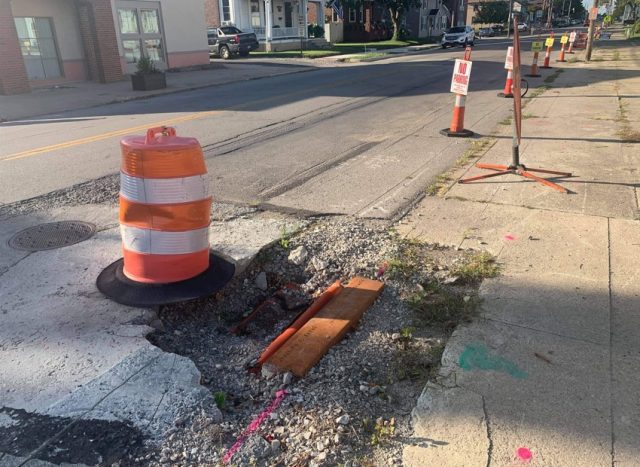 ASHVILLE – A project that started in Ashville almost a year ago remains unfinished, now ODOT says that they are working with a new contractor to finish what has been abandoned.

According to ODOT Public Infomation officer Brooke Ebersole, the project started in October of 2020. Independent contractor Amaazz was responsible for the contract and was hired to do the job. In 2020 they began with drainage work, and then had to winterize the project until Spring (asphalt plants generally close after Thanksgiving.)  They started work again in April, 2021. They continued on some drainage and driveway work, and also milled the pavement down to the rough surface you see currently. Work stopped in June of 2021, and now ODOT has been working since to get a new contractor.

“The residents are frustrated about the current condition of this roadway, and so are we,” said Ebersole.

The communication officer said that this stuff, “rarely happens.” and said that they now have someone in place to finish the job as quickly as possible.

“Strawser Paving is currently in the process of making repairs on Main St. to get the roadway to a condition where it is ready to be paved. Because the surface was milled down for an extended period of time, they have a little bit of extra prep work before we can put new asphalt down. They will also be working on Long St. simultaneously. We expect paving to start near the end of this month.”

ODOT said, “We are making every effort to ensure this project is finished by winter, and appreciate the Villages patience and cooperation until we could get a replacement contractor in. I’ve also been responding to residents and drivers in that area who have inquired about the status and have been keeping them updated as I hear from them.”