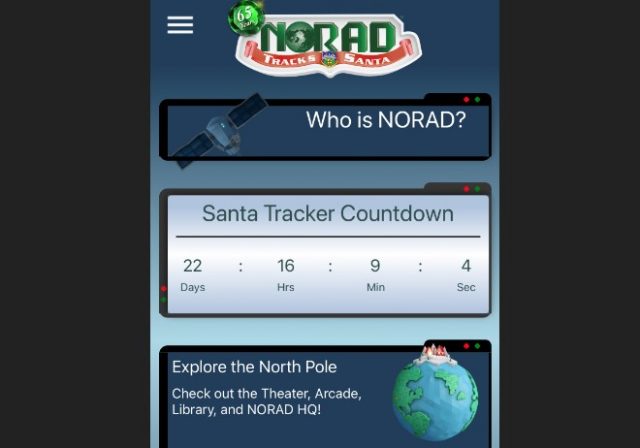 Despite the pandemic NORAD will continue to track Santa as it has since 1955. Social distancing will still play a role in in the tracking and not every kiddo who calls to talk to the North Pole will talk to a live operator like they have in the past. Normally a large amount of volunteers are placed inside a Air base and take calls from eager children, but because of the social distancing issues significantly less volunteers will be used.

But, what NORAD has done is launch the NORAD Tracks Santa website, social media pages, a new mobile app and partner platforms will again be an important part of the program allowing children around the world to track Santa.

Santa trackers can visit http://www.noradsanta.org or use new mobile apps to get up-to-the-minute Santa statistics. These apps will soon be available on Google Play and the Apple App Store. Fans can also track Santa with a variety of other NORAD Tracks Santa partners, including OnStar and Amazon Alexa.

The online and social media experience will go live Dec. 1 and will provide information and games to get everyone ready for the big night. NORAD Tracks Santa will also provide daily updates to its 2.1 million social media followers across its Facebook, Twitter and Instagram platforms.

Santa tracking by NORAD was originally an accident that happened because of a Sears ad misprint that gave a secret government red phone number to kids.  According to NPR, The red phone rang one day in December 1955, and the Government answered it, “and then there was a small voice that just asked, ‘Is this Santa Claus?’ ”

His children remember Commander Shoup as straight-laced and disciplined, and he was annoyed and upset by the call and thought it was a joke — but then, Terri says, the little voice started crying.