(Chillicothe) – According to the Ohio State Highway Patrol, from 2017-2019 there were 93,134 crashes on Ohio roadways in which a driver was either exceeding the posted speed limit or unsafe speed was a contributing circumstance on the crash report. During that same time, 15% of speed-related traffic crashes involved at least one driver between the ages of 15 and 19.
Unsafe speed was attributed to 950 fatal crashes, resulting in 1,040 deaths from 2017-2019. Statewide, this represented 30% of all fatal crashes. Of these fatal crashes, 49% were associated with drunk or drugged driving; while following too close, improper lane change, and left of center violations also contributed to dangerous and deadly crashes.

“Getting behind the wheel of a vehicle is a serious responsibility,” said Governor Mike DeWine. “To prevent senseless tragedies and save lives, drivers should always keep their attention on the road and obey speed limits.”
Male drivers accounted for 59% of speed-related crashes, as well as 61% of all speed citations in the state. From 2017 to 2019, troopers issued an average of slightly more than 364,000 speed citations per year. 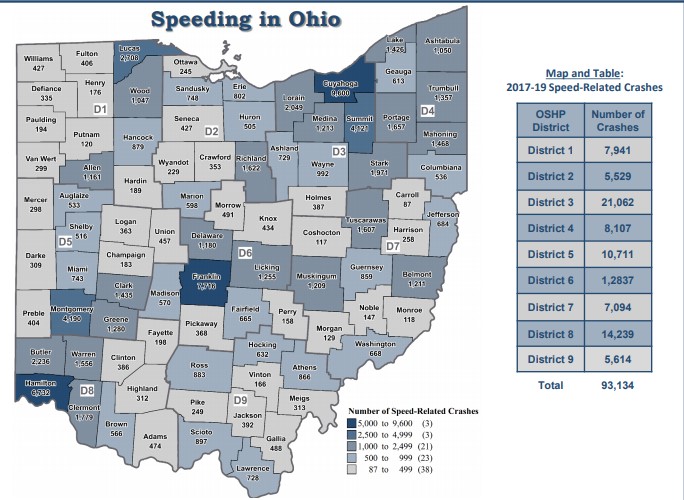 “Poor decisions while driving can stay with motorists for the rest of their lives,” said Lieutenant Tim Karwatske, Chillicothe Post commander. “That is why responsibility, awareness and safe speeds are so critical for our motoring public.”
Locally, unsafe speed was attributed to 1,132 crashes in Ross and Pike counties. Motorists are urged to follow speed limits, and remember that higher speeds represent a small time savings when factors such as traffic, weather, and other conditions are considered.