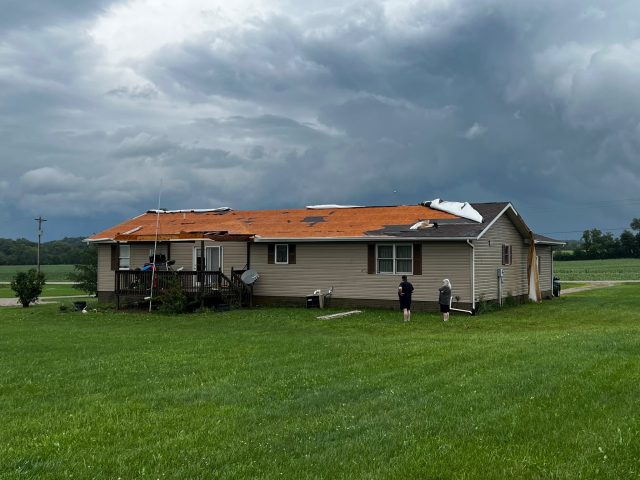 PICKAWAY – The National weather service has confirmed that an EFO tornado touched down on Pickaway’s East side on Sunday.

According to the report the EF0 tornado has an estimated wind of 40-72 MPH.

A total of 5 people were injured in the isolated storm, four minor and one serious.

According to reports around 5 pm on Sunday, an older woman was injured when a camper blew over in the area of 26000 Kingston Pike, that woman was transported to the hospital with serious injuries

Two trees were blown down on 16thrd between Heigle rd and Thomas Hill rd. Fairfield county. Near address 10745 that caused no damage but cut off the roadway for some time.

In the 8900 block of State Route 56 East a man said that his new pole barn was blown over with him and his girlfriend inside. Several items inside the barn were damaged and the building is a total loss.

“She has a bruise and scraped knee besides that we got extremely lucky my girlfriend just happens to get in a void where she fell or else it would have crushed her completely,” said the homeowner.

Widespread damage from destruction to minor structural damage occurred. Injuries within Pickaway Township as result of the tornado did occur. Four (4) injuries, one (1) of those injured did sustain serious injures and is hospitalized in a Columbus trauma center.

The Tornado damage seems to be isolated to the East side of Pickaway County in the 56 areas.

No tornado sirens went off in the area.