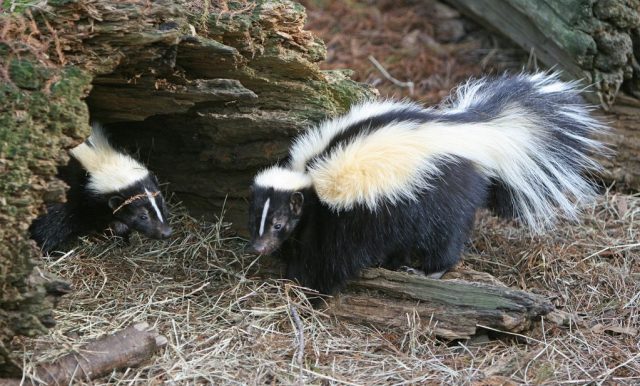 OHIO – The Spring season is almost here and that usually calls for the mating season for some animals in Ohio. One to pay attention to is Ohio’s Striped Skunk mating season because males can get braver and more aggressive during this season.

Sightings are higher in this season according to the Ohio Department of Resources with skunks being in heat from late February through March.

That distinct odor of a skunk could be an uninterested female or from an unlucky skunk that wandered too close to the road in search of a mate. When skunk romance DOESN’T STINK, a litter of 5-9 ‘kits’ are born during the late spring.

Striped Skunks are about the size of a house cat and can spray their funk up to 15 feet with good accuracy! Males do not mate for life but are actually quite promiscuous and will move from den to den mating with females. The female gives birth to babies that are pink and blind, the second week they are furry, and by the third week have opened their eyes. By the sixth week mom is getting them outside and hunting with them foraging for insects, small mammals, fish, crustaceans, fruits, grasses, leaves, buds, grains, nuts, and carrion.

Skunks tend to live in a dug den or one used by other animals that they have taken over, usually if you see one around your home they have most likely found a home under a structure in your area.